The defending champions are looking stronger than ever with 5 resounding wins in the league so far. An edition where all other teams are struggling, MI have found their way up to the points table. They will be hoping they can come out on top tonight against a team who have won 2 matches out of four matches, in Abu Dhabi. MI are looking like the team to beat this season and KKR will be hoping to make a comeback with all guns blazing. MI have won from even the most hopeless situations and it will be a difficult match for the Kolkata to win. They have just two batsmen who are playing really well – Morgan and Tripathi. Shubman Gill has got the runs on his back but his strike rate is telling a different story. Russel has been pale in this edition. Many bowlers including Pat Cummins, Narine and Russel are out of. Things may take a different turn, if KKR win the toss and decide to bat first.

Both teams have faced each other on 26 occasions in the IPL so far, and Mumbai holds a 20-6-win record over KKR. The Mumbai Indians have won 4 titles so far, while the KKR have won two. Both teams are looking equally poised for tonight’s match, but it will be interesting to see how they play each other in Abu Dhabi.

The match will be played at the Sheik Zayed Stadium, Abu Dhabi. Here, Teams batting first have an upper hand generally. The pitch will be slow, and the ball does turn here a lot, so both teams will look to earn some extra runs at the beginning.

Moreover, dew will also play an important factor so whoever wins the toss will look to bat first. The ball will spin  and also help the medium pacers as it has in the past, which is good news for the Kolkata Knight Riders, given the fact that they have some really good pacers in their line-up. 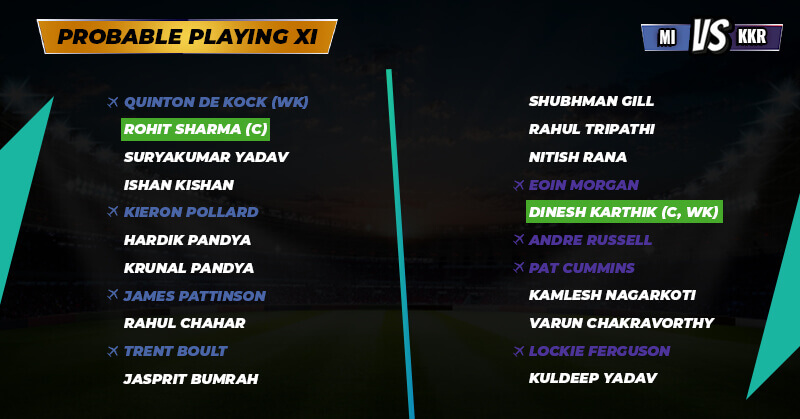 To start off their batting order, there is Shubman Gill is looking decent touch and may turn out to be one of their key players in this game. Nitish Rana has been providing some sort of support at number 3. Sunil Narine has failed to fire at the top unlike previous seasons so he may get replaced by Tom Banton sooner or later. Eoin Morgan has been providing solid support in the middle and is capable of finishing games for them as we saw in the last match, but he has to come up the order. The area of concern here is skipper Dinesh Karthik who has looked really pale in the middle, the team would want him to make a good comeback. Of course, Andre Russel will have to come back to his natural game to help the team’s cause.

Defending champions Mumbai will be relying heavily on their top order as well and skipper Rohit sharma will have to fire with his bat along with partner Quinton De Kock who has looked in a below average form. Although the former is looking in a sublime form and is capable of taking the match away, the latter has failed to fire in the past and will have to find his feet soon. Suryakumar Yadav is looking strong in the middle while Ishan Kishan is in the form of his life and will look to strengthen the middle order. Then, there are Pandya brothers and Kieron Pollard. This looks like a dangerous batting attack and the if they click, we may see a high-scoring match tonight at the Abu Dhabi stadium.

In the first match, there were a few sparks of talent from youngster Shivam Mavi, but the team looked heavily relied on Pat Cummins. However, after 7 matches it would not be wrong to say that KKR are looking really strong in their bowling department with every bowler in top form. Especially Kamlesh Nagarkoti, Shivam Mavi and Varun Chakravarthy, all three have shown exceptional performances and have proved that they are ready for the big stage. The problem is that these bowlers are young and may lose on the experience that their opposition holds, also they got smashed for a little more than 200 runs in their last outing at Abu Dhabi. Big area of concern.

Their bowling department is looking strong enough to take on the Rajasthan Royals. Jasprit Bumrah has displayed why he is the best bowler in the world as he has been maintaining a low economy throughout and will be their go-to bowler in the death overs, there is no doubt about that. He’ll be accompanied by Trent boult and James Pattison who are doing exceptionally, given their last outings.  They have Rahul Chahar in the spin department accompanied by Anukul Roy and Jayant Yadav. It will be interesting to see how they pick their mix of spinners on this spinning pitch.

After taking a good look at the team sheets it is clear that it is going to be a contest to remember! MI is looking really good on paper and will look to capitalize on their top-order’s strength to make a big score on the board or even chase a big score down even if they bat second. There bowling attack is looking strong like always and they are sure to give KKR a run for their money.

On the other hand, Kolkata’s batting order is in below average form with their middle-order. Their advantage is if they bowl really well in the match with a strong bowling attack, they can restrict Mumbai to a low total and then save the day with some good batting performances.