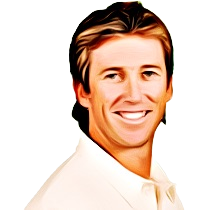 McGrath was always known for maintaining an impeccably accurate line and length, also, he displayed a consistency that enabled him to be one of the most economical and successful fast bowlers of his time. In terms of total career wickets taken, McGrath is second on the list of successful fast bowlers of all time behind James Anderson and is fifth on the all-time list, with the top three wicket takers Muttiah Muralitharan, Shane Warne and Anil Kumble who are all spin bowlers.

McGrath has also taken 381 ODI wickets and is the seventh-highest in the list of one day internationals and holds the record for most wickets (71) in the Cricket World Cup. McGrath finally announced his retirement from Test cricket on 23 December 2006,with his Test career coming to an end after conclusion of the fifth Ashes Test in Sydney in the year 2007, while in the 2007 World Cup, which marked the end of his one-day career, saw him win the man-of-the-tournament award for his outstanding bowling, which was also instrumental in Australia winning the tournament.

McGrath was born to Beverly and Kevin McGrathin Dubbo. He grew up in Narromine, New South Wales, where he first played cricket, and was spotted by Doug Walters who saw tremendous potential in the young bowler. He moved to Sydney to play grade cricket for Sutherland and made his debut for New south Wales during the 1992–93 season. McGrath earned himself a selection in the Test team after only eight first-class matches.

McGrath made his ODI debut against South Africa at Melbourne Cricket Ground, on 29th December 1993. The legend has taken 381 ODI wickets in his career from 250 matches. McGrath also holds the record for most number of wickets (71) in the Cricket World Cup. His best figure in match stands at 7/15 and his economy rate stands at 3.88. He has 7 five-wicket hauls under his belt.

McGrath made his test debut against New Zealand at WACA ground on November 12th, 1993. Since his debut, the medium-fast bowler has played in 124 test matches until his retirement and has scalped 563 wickets in total at an economy rate of 2.5. He has 29 five-wicket hauls and 3 ten-wicket hauls to his name. His best figures in a match is 10/27 and in an innings is 8/24.

McGrath played for the Indian Premier League team of the Delhi Daredevils and stood out as one of IPL’s most economical bowlers during its first season, but he saw no action in the next season, and ultimately had his contract bought out. The legend played in 14 IPL games and took 12 wickets, his best figure being 4/29.

McGrath had noticeably short stint in the shortest format of the game. He just played in a couple of matches after his debut against New Zealand at Eden Park on 17th Feb 2005. The bowler has 5 wickets to his name and his best figure in a match stands at 3/31.

Glenn McGrath came into the world of cricket when the mighty West Indians were dominating the game. As soon as McGrath came in with an aggressive approach against them, even they sat back to contemplate the change in the attitude of Australian players. In Australia's 1995 Test series victory McGrath adapted the approach of bouncing the West Indies team with his deliveries, even the bowlers, which had not happened earlier. In McGrath's biography, Ricky Ponting is quoted as saying: I remember thinking Glenn's decision to take on the West Indies bowlers sent out a positive message to the West Indies that the Australian side was really up for it. Ambrose, Walsh, Kenny Benjamin had never been treated like that before. It made the West Indies sit back and think, 'This Australian team is fair dinkum—they're really up for it.' Even if you aren't the murder boys of cricket, you can show little things to let the opposition know you are serious. It might be the way you warm up, how you dress to go to the ground. Perception can be enormous. If you can give off the right signals to (a) bluffing them or (b) showing them what you're all about. McGrath, at that stage of his career, showed them what he was all about. His body language and the way he looked at their batsman — the wry smile — it sent a signal to the batsman and his own team-mates that he knew what he was doing.