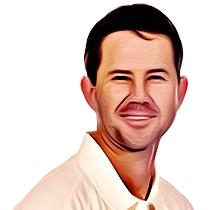 Ricky Thomas Ponting was born on 19 December 1974. Today, he is an Australian cricket coach, commentator, and former cricketer but at the peak of his career,Pontingwas considered the most successful captain in international cricket history, with 220 victories in 324 matches with a winning ratio of 67.91% till date. Ponting was captain of the Australian national team during the 'golden era' of Australian cricket between 2004 and 2011 in Tests and 2002 and 2011 in One Day Internationals. He is a specialist right-handed batsman, an excellent fielder at slip, and an occasional bowler. Ponting was named the "Cricketer of the Decade” in the year 2000.

Ponting is the only Australian Test captain to have led his side to three separate Ashes series losses, but he has also led the Australian team to their second ever 5-0 Ashes win. Ponting then led his team to victory at the 2003 and 2007 Cricket World Cups and was also an important part of the 1999 World Cup winning team led by Steve Waugh.

He also led Australia to ICC Champions Trophy winstwo times in a row, in 2006 and 2009. Playing for Australia in over 160 Tests and 370 ODIs, Ponting remains Australia's leading run-scorer in both Tests and ODIs. The Aussie is also one of only four cricketers along with Sachin Tendulkar, Rahul Dravid and Jacques Kallis in the history of cricket to have scored 13,000 runs in Test cricket. If we put Statistics to work, Ponting remains as one of the most successful Test captains of all time, with 48 victories in 77 Tests under his belt between 2004 and 2010.

Ponting was born in Launceston, Tasmania to Graeme and Lorraine Ponting and is the eldest of their four children. His uncle Greg Campbell had played Test cricket for Australia between 1989 and 1990 and he was the one who introduced young Ponting to the game of cricket.Ponting initially played for the Mowbray Under–13s team at the mere age of 11 during 1985–86. Interestingly, Ponting took part in the five-day annual Northern Tasmania junior cricket competition in1986. He went on to score four centuries in a span ofseven days. Word spread soon andbat manufacturer Kookaburra gave Ponting a sponsorship contract for his achievementwhile he was in just eighth grade.

Ponting made his ODI debut against South Africa at Basin Reserve on 15th Feb 1995. The batting legend played in 375 one day internationals and scored 13704 runs in his career. His tally includes 30 tons and 82 fifties, and his career average stands at 42.04. His highest score in a match is 164.

Ponting made his Test debut against Sri Lanka at the W.A.C.A. ground, on 8th December 1995. Since his debut, Ponting had played in 168 matches and had scored 13,378 runs at an average of 51.85. His career tally includes 41 hundreds, 6 double hundreds and 62 fifties. His highest score in a match stands at 257.

Ponting made his IPL debut for the KKR - Kolkata against the RCB - Bangalore at M. Chinnaswamy Stadium on 18th April 2008. He had noticeably short stint in the premier league where he played just 10 matches and could manage to score 91 runs during his tenure. He quickly moved on to the MI - Mumbai, and after realizing that the format didn’t suit him much switched to the role of a mentor and helped the Mumbai franchise to its first ever IPL title. He then, went on to coach the team in 2015, and instrumented a second title.

Ponting had a short stint in T20 cricket, playing in just 17 matches in his whole career. He had a formidable strike rate of 132.78 in the shortest format of the game. The legend has 401 runs under his belt including 2 fifties. His highest score in match stands at 98. He made his T20 debut against New Zealand at Eden Park on 17th Feb 2005.

As a Cricketer, Ponting is the only cricketer in history to be a part of 100 Test victories. Ponting also holds the record to have been involved in the most ODI victories as a player, with 262 wins. Rarely, will you see figures like these, which clearly states that Ricky Ponting was one of the greatest batsmen to grace the game.