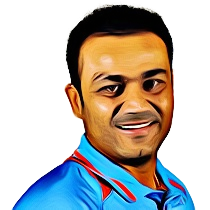 Virender Sehwag was born on 20 October 1978. He is a former Indian cricketer who has also led India in the ODI format on numerous occasions . Popularly Known as one of the most catastrophic batsmen of all time. Sehwag came down to bat as an aggressive right-handed opening batsman and also bowled part-time right-arm off-spin. He made his debut in One Day Internationals in the year 1999 and was selected to play for the Indian test side in 2001. Sehwag became the first Indian to be honored as the Wisden Leading Cricketer in the World for his performance in 2008, in the following year in April 2009, also becoming the first player of any nationality to win the award in 2009. Today, he is known as the, former Vice-Captain of India, former captain of Delhi Daredevils and former captain of Delhi Ranji Team and a former Indian captain on various occasions.

Sehwag holds multiple records under his belt including most runs made by an Indian in Test cricket after he scored 319 against South Africa at the M. A. Chidambaram Stadium in Chennai, this was also the quickest triple century in the history of cricket ( Sehwag reached 300 off just 278 balls) as well as the quickest 250 by any batsman; he reached the feat in 207 balls against Sri Lanka on 3 December 2009 at the Brabourne Stadium in Mumbai.

Sehwag also holds the record of being one of the only four batsmen in the world, who have ever surpassed 300 runs on two occasions in Test cricket. Sehwag also smashed the fastest century ever scored by an Indian in ODI cricket at that point of time, from just 60 balls In March 2009. He smashed his first double century in one day Internationals, against West Indies, becoming the second batsman after Sachin Tendulkar to achieve the feat. He became the highest individual scorer in ODI cricket smashing 219 off 149 balls which was later beaten by fellow teammate Rohit Sharma who hit 264 off 173 balls.

Sehwag, born in a family of a grain merchant, spent his whole childhood in a joint family. He lived with his six teen cousins and his two older siblings. His interest in cricket is attributed to a gift which he got as a Kid; it was a toy bat. Sehwag would pester his parents to let him play cricket during his school days. He attended Jamia Milia Islamia for his graduation and continued his cricket from his school days under his coach Amar Nath Sharma. Sehwag made his debut in first class cricket in the 1997–98 season for Delhi cricket team. He was picked to play for the North Zone cricket team in the Duleep Trophy during the 1998–99 season, finishing fifth in the highest scorer’s list. Next year, he finished fourth on the Duleep Trophy run scoring list, including his 274, which was the highest score of the competition.

Sehwag has been a part of 251 One-day Internationals since his debut against Pakistan at Punjab Cricket Association IS Bindra Stadium on 1st April 1999. The opening batsman has 8273 runs under his belt including 15 hundreds, 1 double hundred and 38 fifties. His career average stands at 35.06 and his strike rate at 104.34. His highest score in match is 219.

Sehwag made his test debut against South Africa at Mangaung Oval on 3rd November 2001. Sehwag has played in 104 test matches in his career and has scored 8586 runs at an average of 49.34 and a strike rate of 82.23. His tally includes 23 hundreds, 6 double-hundreds and 32 fifties. His highest score in a match stands at 319.

Sehwag is an old timer when it comes to IPL. He made his debut against RR - Rajasthan at the Arun Jaitley Stadium on 19th April 2008. He played in 104 IPL matches in his career and has scored 2728 until his last match against the MI - Mumbai at Punjab Cricket Association IS Bindra stadium on 3rd May 2015.

Sehwag made his T20 debut against South Africa at the Wanderers stadium on 1st December 2006. Sehwag had a relatively shorter tenure in this format as he played in just 19 matches from which, he has scored 394 runs including 2 fifties.

He is one of only two players in the world to score a double hundred in one-day Internationals and a triple hundred in Test Cricket, alongside Chris Gayle. He may not have the most hundreds or a 10,000-run mark under his name, but look back at those stats and you will understand how important this man was at crease when he came down to open for India.