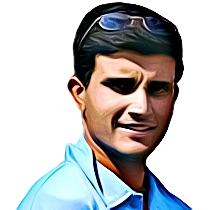 Affectionately known as Dada by his fans and teammates, Sourav Chandidas Ganguly was born on 8th July. Today, he is an Indian cricket administrator, commentator and former national cricket team captain and is the current and 39th president of the Board of Control for Cricket in India.

As a cricketer, he used to bat as a left-handed opening batsman and was also captain of the Indian national team at the peak of his career. Ganguly was elected as the president of the BCCI in 2019 and subsequently the President of the Editorial Board with Wisden India. Before being elected as the President of BCCI, he was already the President of Cricket Association of Bengal, governing body for cricket in West Bengal, India. He is hugely regarded as one of the greatest captains in the Cricket world. During the peak of his career, Ganguly established himself as one of the world's greatest batsmen and also one of the most successful captain of the Indian cricket team. he was so prolific through the offside while batting, that it earned him the nickname “God of the Offside” for his elegant stroke play square of the wicket and through the covers.

Sourav was introduced to the world of cricket by his elder brother, Snehasish. His career took off by playing in state and school teams. After playing in several Indian domestic tournaments, such as the Ranji and Duleep trophies, Sourav finally got a big-break while India was on the tour of England. He smashed 131 runs and straightaway made his place in the Indian team. Ganguly's spot in the national team was cemented after successful knocks in series against Sri Lanka, Pakistan, and Australia, winning the Man of the Match awards against them. In the 1999 Cricket World Cup, Sourav was involved in a partnership of 318 runs with Rahul Dravid, which still remains the highest overall partnership score in the World Cup tournament history. Due to the match-fixing scandals in 2000 by other senior players of the team, Sachin Tendulkar resigned his position also because he was going through health issues, Ganguly was named the captain of the Indian cricket team.

The left-handed batsman was a prolific One Day International (ODI) batsman, with over 11,000 ODI runs to his name. He also led India into the World Cup final in 2003, where his team was defeated by Australia. Due to a fall in individual performance, he was dropped from the national team in the following year. He returned to the National side in 2006 and made successful batting displays. He came back to play again in the World Cup 2007. During his career, the legend played 311 matches and scored 11,363 runs including 22 hundreds and 72 fifties. He also took 100 ODI wickets in this format at an economy rate of 5.06. He made his ODI debut against the West Indies at the Gabba on 11th January 1992.

Sourav is considered one of the most successful Indian Test captains to date, winning 21 out of 49 test matches. He is also the most successful Indian test captain overseas with 11 wins under his belt. The Indian team was ranked eighth in the ICC rankings before his tenure as the captain, and under his tenure the Indian team’s rank went up to second in the world rankings. Reckoned as an aggressive captain, Ganguly is credited with having nurtured the careers of many young players like Sehwag and Dhoni who played under him and transformed the Indian outfit into an aggressive fighting unit. The Indian captain made his debut in test cricket against England at Lord’s on 20th June 1996, since then, he has scored 7212 runs at an average of 42.18, this tally includes 16 hundreds, 1 double-hundreds and 35 fifties. The Indian captain was a designated part-timer with the bowl and has 32 international test wickets to his name.

Sourav was named the captain of the Kolkata franchise KKR - Kolkata and made his debut against the RCB - Bangalore at the M. Chinnaswamy Stadium on 18th April 2008. The former captain played in 59 IPL matches and scored 1349 runs which includes 7 fifties. His highest score in a match stands at 91. He also has 10 wickets in his kitty.