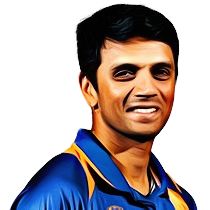 Rahul Sharad Dravid was born on 11 January 1973. Today, he is known as a former Indian cricketer and captain of the Indian national team. He is also the Director of Cricket Operations at the National Cricket Academy in Bengaluru, India. Dravid also monitors the progress of India A and India under-19 cricket teams. Initially he started off as the Head Coach for the India Under-19 and India A teams from 2016 to 2019.

During his coaching tenure, the under-19 team finished as runners up at the under-19 Cricket World Cup 2016 and also won the under-19 Cricket World Cup. In the year 2019, BCCI appointed Dravid as Head of National Cricket Academy. Popular around the world for his sound batting technique, Dravid has nearly 25,000 runs under his belt in international cricket and is widely regarded as one of the greatest batsmen to ever play the game. He is also nicknamed as Dependable or Mr. Dependable and was often referred to as The Great Wall or The Wall by Indian cricket fans.

By December 2016, Dravid was the fourth-highest run scorer in Test cricket, behind Sachin Tendulkar, Ricky Ponting and Jacques Kallis. In the year 2004, after concluding his hundred against Bangladesh in Chittagong, Dravid became the first batsman ever to score a hundred against all the ten Test-playing countries. As of October 2012, he held the record for the most catches taken by a player (non-wicket-keeper) in Test cricket, with 210. Dravid also holds a unique record of never getting out for a Golden duck in the 286 Test innings which he has played. In his career, he has faced 31258 balls, which is the highest number of balls faced by any batsman in test cricket. The batsman has spent 44152 minutes at the crease this is the highest time spent on the batting crease by any batsman in test cricket.

Dravid started playing serious cricket at the mere age of 12, representing Karnataka at the under-15, the under-17 and the under-19 levels. Former cricketer Keki Tarapore was the first one to notice Dravid's batting skills while coaching him at a summer camp in the M. Chinnaswamy Stadium. Dravid scored a hundred for his school team. He was also a wicket-keeper for his team. Dravid went to make his Ranji Trophy debut in February 1991, while he was still attending college. He scored 82 runs in a match, which eventually ended in a draw playing alongside future India teammates Anil Kumble and Javagal Srinath against Maharashtra in Pune. He then followed it up with a hundred against West Bengal and three successive hundred after.

Rahul made his ODI debut against Sri Lanka at the Padang on 3rd April 1996. The legend went to feature in 344 One-day Internationals and scored 10,889 runs in his career at an average of 39.17 including 12 hundreds and 83 fifties.

Rahul has played in 164 test matches in his career since he made his debut against England at Lord’s on 20th June 1996. The batting prodigy has scored 13288 runs including 36 hundreds, 5 double-hundreds and 63 fifties at an average of 52.31. His highest score in a test match stands at 270 and he last featured in a test match against Australia at Adelaide Oval on 24th Jan 2012.

Rahul Dravid made his debut in the IPL as the captain of the RCB - Bangalore, playing against the KKR - Kolkata at M. Chinnaswamy stadium on 18th April 2008. Since his debut, the Bangalore captain featured in 89 matches and scored 2174 runs. Later in his career, he played for RR - Rajasthan and led the team to the finals of Champions League T20 in 2013, and play-offs of Indian Premier League in 2013. Dravid announced his retirement from T20 after playing the 2013 Champions League Twenty20 in Sept.-Oct 2013.

Dravid featured in only one match in the shortest format of the game, against England at Emirates Old Trafford on 31st August 2011. He scored 31 runs in the match including 3 sixes, at a strike rate of 147.62.

In a team that had someone like Sachin , a wrist player like Laxman, an aggressive batsman like Sourav and hitters like Sehwag, Yuvraj and Dhoni, Dravid made his own place. He acted like a protective gear for the team, a man who could hold the crease for longer than anyone in world cricket. He took all the burnt so that players like Sachin and Sourav could go about their game. On many occasions, his efforts might have been overshadowed by his batting partners, but no one can deny the fact that Indian test team without Rahul Dravid is like car without any fuel. Rahul left an impact on test cricket that will forever be felt in the Indian dressing room. He was not just a test batsman, he was an institution in test cricket.