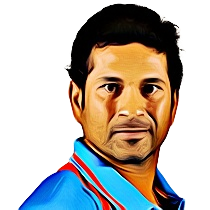 Sachin Tendulkar is considered among one of the living legends of the sport. Sachin started his cricketing career at an age of 11, he was 16 when he played his first international test match for Indian Cricket team. In 2005, he was the first Cricketer to score 35 centuries in international test cricket format. In 24 years of his international cricketing career (1989-2013) he made several records and broke many of them as well. Sachin made his debut on 15th Nov,1989 in a test match against Pakistan and completed his 24 years of serving nation and retired on 16th Nov,2013 in a test match against West Indies.

Tendulkar took up cricket at the mere age of eleven, made his Test debut on 15 November 1989 against Pakistan in Karachi when he was just sixteen, and went on to represent India in International cricket for almost twenty-four years. Halfway through his careerin 2002, Wisden Cricketers' Almanack ranked him the second greatest Test batsman of all time, behind Don Bradman, and the second greatest ODI batsman of all time, behind Viv Richards.Later on in his career, Tendulkar was an integral part of the Indian team which won the 2011 World Cup, his first win out of his six World Cup appearances for India.He was previously named the "Player of the Tournament" in the 2003 edition of the cricket world cup, hosted by South Africa. In the year 2013, Sachin was the only Indian cricketer included in an all-time Test World XI named to mark the 150th anniversary of Wisden Cricketers' Almanack.

Sachin spent his formative days in the Sahitya Sahawas Cooperative Housing Society located in Bandra. Sachin was considered a bully as a young boy andwould often pick up fights with new children in his school. To help curb his mischievous tendencies, his older brother Ajit introduced a young Sachin to the game of cricket in the year 1984. He introduced him to Ramakant Achrekar, a popular cricket coach and a club cricketer of repute in the cricketing circle, at Shivaji Park, Dadar. In his first meeting, the young Sachin couldn’t performvery well. Ajit told Achrekar that the young boy was feeling self-conscious due to the coach’s observation and wasn’t displaying his natural game. Ajit requested the coach to give the lad another chance and watch him play while hiding behind a tree. This time, Sachin, found himself unobserved and played much better and was eventually accepted at theAchrekar academy. Achrekar was impressed with Sachin's batting skills and advised him to shift his schooling to Sharadashram Vidyamandir High School,a school at Dadar which already had a dominant cricket team and had previously produced many distinguished cricketers. He was also coached under the guidance of Achrekar at Shivaji Park during the morningand evening sessions. Sachin would practice non-stop in the nets. When he got exhausted, Achrekar would put a one-rupee coin on the top of the stumps, and any bowler who dismissed Sachin would get the coin. If Sachin passed the whole session without getting out, the coach would then give the coin to him. Sachin now considers the 13 coins he won then, as some of his most prized possessions.

The Little master has probably played the most number of ODI matches in the history of cricket. The legend made his debut against Pakistan at Jinnah stadium on 18th December 1989 and since then he has played in 463 one-day matches. He has scored 18426 runs in his career which is the most by any player. His tally includes 49 hundreds, 1 double-hundred, and 96 fifties under his belt, a record that remains way high on every scorer’s list. He was also the first player on the planet to score 200 runs in an ODI match.

The legend had played in 200 test matches since his debut against Pakistan at National Stadium on 15th November 1989. The batting prodigy has scored 15921 runs in test cricket which incudes 51 hundreds, 6 double-hundreds and 68 fifties, which is the most by any player in the history of Cricket. The master was also a witty part-timer with the ball, he took 46 wickets in his career with his right-arm leg break bowling style at an economy rate of 3.53. His highest score in match stands at 248.

Sachin started his IPL career by leading his home team Mumbai. He made his debut against the CSK - Chennai at the Wankhede Stadium on 14th of May 2008. Since then the legend has played in 78 IPL matches and has scored 2334 runs and also has 1 hundred and 13 fifties under his belt. After that the maestro went on to mentor the team.

Sachin has played just one T20 match in his illustrious career against South Africa at the Wanderers stadium on 1st December 2006.

We have all heard the chant – Sachiiiiiiiin, Sachin!! All our lives, we have lived with the fact that the best batsman in the world plays for our national team. The amount of pride and joy Sachin brings to the people of India is incomparable. The way a stadium full of people chant his name in unison would send chills through the spines of every opponent and goosebumps for every Indian cricket fan and Why not! Many batsmen will come and go, but Sachin Ramesh Tendulkar will go on become an emotion, a symbol of hope and a legend in the hearts of everyone who loves the game. Sachin is nothing less than a humane version of God. As Mathew Hayden once famously said , “ I have seen God, he bats at no.4 for India”.