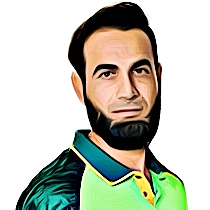 Mohammad Imran Tahir is a Pakistan-born South Africa cricketer. He is a spin bowler who hails from Lahore, Punjab, Pakistan and plays cricket for the South African cricket team. Tahir presently represents South Africa in T20 internationals while also playing for the Dolphins in South Africa, Multan Sultans in the Pakistan Super League, Guyana Amazon Warriors in the Caribbean Premier League, CSK - Chennai in the IPL, and Surrey in the Vitality t20 Blast.

He developed his skillset in Pakistan. He even went on to represent the Pakistan U-19 team and was also a part of the Pakistan A side on a few tours. However, he failed to make any progress to the International stage. Pakistan’s bench strength already had few quality spinners and Tahir never really got ample opportunities at the senior level to guarantee a selection.

Tahir was quick to realize this. He simply did not wat to waste his time struggling to find a place. He started playing county cricket in England but did not stay there for long. He made major change in his life by moving to South Africa. Considering South Africa's forever shortage of quality spinners, Tahir struck gold. settled down in South Africa and also got married to an Indian origin South African citizen. He got his first call to play for the South African Test team in the year 2010 when England were on a tour, but due to an embarrassing error by the selection committee Tahir was not allowed to play for South African team until January 2011. He was quickly withdrawn from the team then but then also found his way back almost immediately after he was finally eligible to play.

Tahir was born in Lahore, Pakistan and learnt playing the game while growing up there. He started working at the age of 16 as a retail salesman at Lahore's Pace Shopping Mall on exceptionally low salary, to support his family as he was the eldest sibling in his family. His life changed when he was finally selected to represent the Pakistan U-19 cricket team in the trials, he eventually progressed onto the Pakistan A side on a few tours. However, Tahir failed to make . He started playing county cricket in England initially but could not make a mark long. He then decided to move to South Africa, a country facing perennial dearth of quality spinners. He played domestic cricket for five years in South Africa and lived "hand-to-mouth for the first two years."

Tahir has played in 107 One-day internationals till date. The spinner from South Africa has 173 wickets since his debut against West Indies at the Arun Jaitley stadium on 24th Feb 2011. His best figure in match stands at 7/45.

Imran Tahir made his test debut against Australia at Newlands on 9th November 2011. The wrist-spinner has played 20 matches and has scalped 57 wickets including 2 five-wicket hauls at an economy rate of 3.51. His best figure in an innings stands at 5/32 and his best figure in match is 8/130.

Tahir made his IPL debut against SRH - Hyderabad at the Arun Jaitley stadium on 10th May 2014. Since then, he has played in 55 matches and has grabbed 79 wickets at an economy rate 7.88. He has been one of the most animated and loved bowlers in the shortest format of the game. His antics on the ground and his celebration is a delight for fans.

Tahir has played in 38 matches since his debut against Sri Lanka at R. Premadasa on 2nd August 2013. Since then, the bowler has taken 63 wickets at an economy rate of 6.73, this includes 2 five-wicket hauls.

After playing just two editions of the cricket world cup, Tahir has become the third highest wicket-taker for South Africa in World Cups, behind only Alan Donald and Shaun Pollock. Although, Tahir has already announced his retirement after the 2019 tournament, the most successful South African spinner would have liked to end his international career with a World Cup medal. However, South Africa failed to make a mark in yet another ICC tournament. Imran Tahir’s story tells us that no matter how hard it gets, if you are destined to get somewhere, you will if you don’t stop working for it. The wrist spinner traveled through 3 countries and more than 20 teams across the world to prove himself and finally made his mark as a world-class spinner.