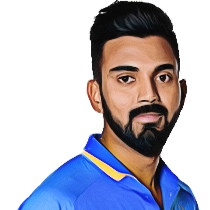 Rahul was born in Mangalore in 1992 to K.N Lokesh, a professor and the former director of the National Institute of technology in Karnataka and to Shri Rajeshwari, a professor at the Mangalore university. A funny story goes that his father, Lokesh was a great fan of the famous cricketer and wanted to name his son after the name of Sunil Gavaskar’s son, but he mistook the name as Rahul instead of Rohan and that’s how KL got his name!

Hailing from a family of laureates, Rahul had to be academically fit, so he completed his education from NIT Karnataka. He always had a thing for cricket and many people around him had noticed this when he was playing on grass pitches in the college fields. After a certain point of time his parents realized that their boy might be extraordinary and so they decided the Rahul must get formal training.

A boy who was playing college and club cricket soon rose through the ranks and broke into the scene in 2010 under-19 world cup scoring 143 runs in the series. In the same year, he made his first-class debut for Karnataka and had a decent season. He could not earn a place in the next season but came back for the 2012-2013 season. This time he had an exceptionally good run this time around and he went on to become the highest scorer of the season. This performance got noticed and earned him a place in the National test side.

He made his One-day International debut in 2016 against Zimbabwe and he made heads turn with a century on debut. Since then he has been in and out of the team and has been able to impress the selectors with his attacking skills. He was selected for the 2019 world cup where he scored a century against the Sri Lankans. He was also suspended for a little while By the BCCI following his comments on a famous Reality show. The suspension caused Rahul to miss the New Zealand tour but was back in the side soon after. However, he has played in about 32 matches totally in which he has scored 1239 runs at an strike rate of 87.07.

Rahul made his test debut in a Boxing Day Test at the MCG in 2014. He was given the test cap by then captain, MS Dhoni. He was brought in to fill for Rohit Sharma, but he did not really have a dream debut as he could manage just 4 runs from both his innings. Although he did not have good outing the captain and the selectors thought of giving him another shot in the next test match at Sydney, and this time he proved he is worth his spot in the team by scoring his maiden test hundred. This Hundred turned out be the icebreaker for the young lad as he went on to score hundreds against the West Indies and Sri Lanka in respective away tours.Till now, he has played 36 matches with a score of 2006 runs.

He made his IPL debut during the 2013 season for the RCB - Bangalore as a batsman who can also keep the wickets. In the next season he was bought by the SunRisers for a huge salary. He came back to his former team RCB in 2016 and finished the season as RCB’s third highest run scorer, scoring 397 in 14 matches. In 2018, the KXIP - Punjab bought him for a whopping 11 crores. He had a good run with them as well, he scored three 90+ scores, the fastest 50 in the history of IPL and a 100 not out against the MI - Mumbai. Rahul has taken over the captaincy from R Ashwin and will lead the team in the 2020 season.

Rahul made his T20 debut in the tour of Zimbabwe in 2016, the same series in which he made his ODI debut as well. He scored a quick-fire 110* off just 46 balls against West Indies later that year and with this knock he became the only batsman to score a century batting at No.4 or lower and also the second fastest century. In 2018, he scored another ton against England and soon was reckoned as one of the mainstays of the team.