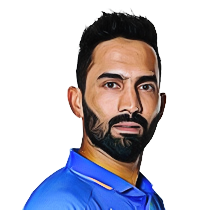 The sight is ever remembered. A picture of Dinesh Karthik in India colors, horizontal on the ground after he stumped Michael Vaughan in 2004 at Lords has been inscribed in the minds of billions of cricket lovers. That was his first international dismissal as a wicket-keeper in India colors.

Dinesh Karthik was born in Chennai on 1st June 1985. The right-hand batsman and a wicket-keeper began to play cricket at the age of 10. After living in Kuwait for two years where his father had worked, Karthik had come to Chennai and studied in school there. Karthik’s first coach was his father who himself was a first-division cricketer from Chennai. But he was not able to continue due to pressure from family for the studies. So Karthik’s father did not want his son to face the same fate and trained him hard from his son's early age. His father used to throw him hard leather balls at high speed to develop his reflexes. Karthik was initially a batsman but later developed himself as a wicket-keeper during his stint with the Tamil Nadu youth team where former cricketer-cum-coach Robin Singh considered him highly fit.

Despite having scored runs a galore in the domestic cricket Karthik’s international career never took off in a fashioned way. The key reason was Mahendra Singh Dhoni’s presence in the Indian team. Karthik is married to Dipika Pallikal who also is an Indian international squash player.

Dinesh Karthik who steadily progressed in the youth level, in the under-14 and under-19 for Tamil Nadu, made his debut in first-class cricket for the state in Ranji Trophy against Baroda as a wicket-keeper in 2002. He batted in the five matches of the round-robin, scoring 179 runs at an average of 35.80 with a top score of 88 against Uttar Pradesh. But after that match, he was completely off-form and was not able to score more than 20 runs during the season. He took 11 wickets but his repeated wicket-keeping errors Karthik was finally dropped from the playing eleven for the season’s final matches. However, he managed to regain his form and got selected in the Indian squad for the 2004 under-19 World Cup in Bangladesh. He had shown his consistency in that season in Ranji Trophy, 438 runs with two centuries and 20 catches. He struck his maiden first-class century against (122) Railways in the Ranji Trophy semifinal and also scored 109 in the final against Mumbai. In the 2009-10 domestic season, Karthik was the captain of six Ranji Trophy matches, finishing the season with 443 runs at an average of 55.37. Karthik has played 167 first-class matches so far and scored 9620 runs at an average of 40.93 with 28 centuries and 43 fifties including his highest score of 213. In the List ‘A’ game, Karthik has played in 238 matches and scored 6890 runs with 11 centuries and 37 fifties.

Dinesh Karthik will be always remembered in the One-Day International format for his memorable show behind the stumps at Lords in 2004 against England. He scored only 1. But standing behind the stumps he designed that memorable picture, taking the magnificent catch of Michael Vaughan diving down the leg side horizontally off Anil Kumble’s bowling. He captured another catch in the match and he also participated in the 2004 ICC Champions Trophy, playing the match against Kenya and gloved three catches. But he was finally replaced by MS Dhoni and did not get a chance to return to the national squad for two years. He has played in 94 ODIs and scored 1752 runs at an average of 30.20 with 9 fifties including the best score of 79.

Dinesh Karthik made his debut in the 4th Test in 2004, playing against Australia at Mumbai. He replaced Parthiv Patel who was struggling with form and injury also. Karthik failed with the bat scoring 10 and 4, respectively, in both the innings, but took two catches behind the stumps. His wicket-keeping earned applause mainly because the pitch had behaved with variable bounce and spin where 40 wickets fell in two days. However, Karthik has played in only 26 tests and scored 1025 runs at an average of 25. His highest run in the Test has been 129.

Dinesh Karthik has been performing in the Indian Premier League (IPL) for the last 13 years. He started playing in the League in 2008 as wicket-keeper for Delhi Daredevils, scoring 145 at an average of 24.16 with a strike rate of 135.51. His highest score for Delhi was an unbeaten 56 that helped Delhi to ensure a five-wicket win against Mumbai Indians in a group match. He then was bought by Kings XI Punjab in 2011 as the second most expensive player in the team. Karthik then had represented Mumbai Indians, Royal Challengers Bangalore, Gujrat Lions, and finally was roped in by Kolkata Knight Riders in 2018. Amidst the switch-over from one franchise team to another Karthik earned maximum when he was bought by Delhi Daredevils at Rs 12.5 crores.

Dinesh Karthik made his debut in Twenty20 International in 2006 against South Africa at Johannesburg. Karthik remained 31 not out of 28 deliveries. In 32 T20Is Karthik has scored 399 runs at an average of 33.25 including the best score of 48. In the domestic circuit, Karthik has amassed 6060 runs in 310 T20 matches including his highest score unbeaten 97.

Dinesh Karthik will be ever remembered for his horizontal catch of Vaughan at Lords.