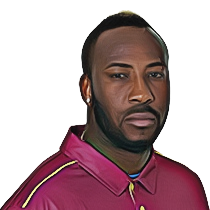 Andre Russell is a West Indian cricketer. He was born on 29th April 1988 in Jamaica. He is an all-rounder who is a right-arm medium pacer and a right-hand batsman. On the crease, he primarily works as a finisher. He can hit the ball hard, exhibiting lofted shots over the fencing consistently, and with the ball, he can produce quick and sharp deliveries that often create danger for any batsman. Exhibiting his potential since his young age Russell was one of the key members of the West Indies team that became two-time World champion in the Twenty20 World Cups.

The all-rounder who also has set his flamboyant image on and off the field was banned from cricket for one year from January 2017 to January 2018 by the Jamaican anti-doping commission after the cricketer failed to submit whereabouts clause three times in 2015.

Andre Russell made his debut in first-class cricket at the age of 19 only, playing for Jamaica against the Windward Islands in 2007. However, he was not impressive in his maiden appearance in the four-day match. He scored only 12 and 18 in both the innings, respectively, and was wicket-less in the match. In first-class cricket Russell however failed to show a glimpse of his potential. He has scored 609 runs in 17 first-class matches at an average of 26.47 including only two centuries and claimed 54 wickets in as many matches. But at the same time, Russell was quite proficient in the limited-over game. Having played in 93 List 'A' matches Russell has scored 1953 runs and claimed 131 wickets. It was 2011 when Russell came into the searchlight, exhibiting a whipping 61 off 34 deliveries and capturing 6 wickets for 42 runs against Ireland in the limited-over game. Already a year before in 2010, Russell had gone to England, playing for Barnards Green Cricket Club and helped them to win Worcestershire Cricket League.

Andre Russell made his debut in a One-Day International match in the ICC World Cup 2011 against Ireland at Mohali. Russell failed to deliver in his opening ODI, scoring only 3, and managed one wicket in 10 overs at the cost of 37 runs. However, Russell was able to deliver after a couple of months against newly-crowned India in the 2011 World Cup. He went to bat at number 9 and at a time when West Indies were struggling with 96 for 7 and then Russell smashed 92 off 94 deliveries. His best was seen in 2015 when against South Africa at Port Elizabeth he struck 64 off 40 balls ad since he earned the reputation of being 'specialist batsman in slog over'. In 2019 Russell was selected in the West Indies squad for the ODI World Cup and in the match against Australia, the all-rounder set a milestone of scoring 1000 runs, facing only 767 deliveries to become the quickest batsman considering the balls faced by a batsman in the ODI. Russell has played in 56 ODI matches and scored 1034 runs at a strike rate of 130.22 including two fifties and claimed 70 wickets so far at an economy rate of 5.84 including his best figure of 4 for 35.

Andre Russell has only one Test so far against Sri Lanka at Galle in 2010. But batting at number nine position he scored only 2 while managed one wicket at the cost of 73 runs in 15 overs. The match was drawn.

In his glittering career in the Indian Premier League, Russell was first bought by Delhi Daredevils in 2012 for a price of 450,000 US dollars. Playing there for two seasons He switched over to Kolkata Knight Riders. Having established himself as the key batsman, especially in the slog over, Russell showed consistent performance, winning the super striker award for highest strike rate in the competition in 2018 IPL and winning the award also in the 2019 IPL for having achieved a record strike rate of 204.81. He won the player of the tournament award in that IPL with 510 runs in 14 matches and scalped 11 wickets. Russell has played in 74 IPL matches and scored 1517 runs while with the ball he has picked up 61 wickets so far.

Russell has already played in more than 300 Twenty20 matches and represented several franchise teams in different leagues in different countries like India, Bangladesh, Australia, Pakistan, Canada, and obviously in the West Indian franchise league. Russell made his debut in the T20 International match against Pakistan in 2011. But in his opening match, he was big zero, being out for a duck as well as became wicket-less. However, Russell having participated in 49 T20Is has scored 540 runs and claimed 26 wickets.

Russell the ‘slog over’ specialist.