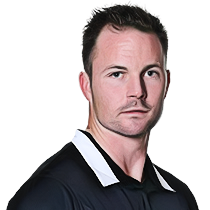 Colin Munro was born in 11 March 1987 in Durban, Natal Province, South Africa. Munro went to Maidstone Primary school in Tongaat and after moving to New Zealand and then went to Pakuranga College and played in the school’s cricket team. Munro also played in the Under-19 world cup in 2006 for New Zealand.

Munro mostly plays in the limited overs format for New Zealand and is one of the quality all-rounders that New Zealand has to offer. Munro's debut in the domestic circuit was not anything people had not seen before but his consistent performances in the T20s made him an instant hit. He played an important role in Auckland's HRV Cup Victory and then he was picked up for the Auckland Aces team in the 2012 Champions League T20 held in India.

In the year 2012-13, Munro along with Craig Cachopa built a partnership of 377 runs for the sixth wicket against the Wellington Firebirds in the Plunket Shield, they fell two runs short of the sixth-wicket partnership record. Munro scored the second highest score for the Auckland Aces of 269 runs with 14 sixes and 27 fours. Munro finally made heads turn when he made his T20I debut against South Africa in December 2012. He followed it up with an ODI debut in the same series. He scored his first ODI fifty in the second match of the series. He finally got a test call, but he was out on a duck in the first innings.

Munro made his ODI debut against South Africa at Diamond Oval on 22nd Jan 2013. His aggressive approach to the game made him a mainstay in the New Zealand Team and he started to open for the Black Caps in the limited overs format but due to inconsistencies in his performances, he has been in and out of the team. He has played 57 matches and has 1271 runs at a strike rate of 104.7. He is yet to hit his maiden ODI hundred but 8 quickfire fifties to his name.

Munro made his debut for New Zealand team in Test cricket on 11 January 2013 against South Africa at Port Elizabeth, Munro has played just one test match till date for his national team and he got out for a duck in the first innings and could gather 15 runs in the next hitting three boundaries in his short outing. He is more of a limited overs player and has a more successful career in the shorter formats of the game.

Munro made his IPL debut against the DC - Delhi on 10th April 2016. He was playing for the KKR - Kolkata at the Eden Gardens. He has played 13 matches till date and has 177 runs to his name; he has hit 19 fours and 8 sixes in the tournament so far.

Munro made his T20 debut against South Africa at Kingsmead on Dec 21, 2012. He played a match against Sri Lanka in 2016, in which he scored the second fastest T20I fifty of all time in 14 balls, hitting 7 sixes, falling two balls short of 12-ball fifty of Yuvraj Singh. He also has the fastest fifty by a New Zealander in his kitty, beating the previous record set by his teammate Martin Guptill who hit 50 from 19 balls in that very same match. Munro scored his first Twenty20 International hundred against Bangladesh in 2017, thus becoming the third player from his country to achieve this feat. With his second T20I century against India, he became the fourth batsman to score two T20I centuries and the first batsman to score two in a year. He hit another century against West Indies in 2018, then he became the first player to score three centuries in T20I cricket. With this feat, therefore Colin Munro is the No.1 T20I batsman in the world.

Records (all formats) • Munro played a match against Sri Lanka in 2016, in which he scored the second fastest T20I fifty of all time in 14 balls • He has also scored the fastest fifty by a New Zealander • Munro became the first player to score three hundreds in T20I cricket Colin Munro is an aggressive batsman who loves to have a go at the bowlers. He has a variety of shots that demolish the best bowlers in the business. He is a power-packed hitter and is just the player you need to open the innings for you in the shortest format of the game.