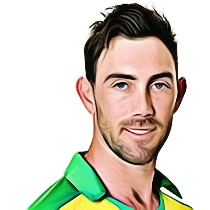 Glenn Maxwell was born in Oct 14, 1988 in Kew. Victoria. Named as the ‘Big show’ by his teammates due to his immense confidence and power packed hitting Maxwell is one of the most stylish players around. Surprisingly, Maxwell started his cricket career with pace blower, before changing his bowling style to off-spin. Also known for his precision and powerful throws at the stumps, he is one of those cricketers in the world who has wide range of extravagant sweep shots in his kitty and is also Known by the name ‘Mr. 360’.

Maxwell became a part of the Victorian team in 2009, he was also called to play for the FDR squad in November because of an injury to Andrew McDonald. In 2010, Australia were playing in the Hong Kong cricket sixes tournament, where he was named the player of the tournament and Australia came out as winners of the competition. In the same year, Maxwell was picked up to play in the Emerging Players Tournament, He scored an impressive 63 against Team India.

Maxwell made his debut against New South wales in 2010-11 for Victoria. He scored 38 runs and took two crucial wickets and grabbed a couple of catches. He got noticed by the Critics and the media after scoring a blistering 51 off just 19 balls against Tasmania in a Ryobi Cup. This was the fastest fifty in the Australian domestic cricket history. He followed this up with another good performance against South Australia 103 and 63, which earned him the Man of the Match award, he also took three beautiful catches in that match.

Maxwell made his ODI debut for Australia against Afghanistan in a one-off One Day International in the United Arab Emirates in 2012.Maxwell played his first ODI at home against Sri Lanka on 10 Jan 2013, he just scored 5 runs. On 1 February 2013, he scored a quick-fire 51* from 35 balls as an opener as Australia chased down an easy the target of 71 set by the West Indies in their first ODI of the series. In the 2nd ODI in Perth, he failed to score, but took 4/63 with the ball to bowl out the visitors for 212 in 38.1 overs. In the last two games he took 4 and 1-44, and 1-34 and 1.

Maxwell’s Test Career started against India. Australia was touring India 2012-13 and the team was looking for an all-rounder to fill the small gaps, Maxwell was the top of his game and so he was picked for the tour. In March 2013, Maxwell made his debut against India in the second test at Hyderabad. He could not do much with the bat in that match, scoring just 13 and 8 in the two innings but took 4 wickets for 127 runs with ball. He made a comeback in the fourth and final Test in Delhi due to a Michael Clarke injury. To everyone’s surprise, he failed to make an impact with the bat making just 10 and 8. Maxwell had missed selection for the 2013 Ashes but was picked to play for Australia A in a tour of South Africa. He scored 61 and 25 against Zimbabwe A, and 155 and 17 against South Africa A.

He made his IPL debut in 2012 for the Delhi Daredevils and then moved to KXIP - Punjab. They Paid 6 crores in the auction to buy him and he became their highest run-getter in the tournament and the third-highest overall. He scored 552 runs in 16 matches, including 5 half-centuries. He also picked 1 wicket in the tournament. In 2017, he was named the captain of the team. With so much responsibility on his head, he kept his nerves and scored 310 runs in 14 games and picked 7 wickets for the team. The Indian crowd started to recognize him,and he started to create a fan-following of his own, this was the start of the ‘Maxwell fever’.

Maxwell made his cricket debut against Pakistan on September 5th, 2012. Maxwell then played in two T20I games against Pakistan in the same tour. In his debut, he scored 4 and bowled with figures 0-25. In third T20I, he made 27 off 20 balls and took 1-12. Maxwell was picked in Australia's squad to play in the 2012 ICC World Twenty20 in Sri Lanka. Maxwell was also picked for Australia's 15-man squad for 2014 ICC World Twenty20 in Bangladesh. He had started the tournament by making 74 off just 33 balls including 7 fours and 6 sixes against Pakistan in Australia's First group stage match.

Records (all formats) • Maxwell scored the fastest ODI century by an Australian, in 52 balls against Sri Lanka in 2015 World Cup, this century was recognized as the second-fastest century in World Cup cricket • Maxwell scored the second-highest runs by an individual inT20I by making 145*. • Maxwell is the second Australian to score centuries in all three formats at the international level • He is the first batsman to score a century in his maiden T20 innings as an opener Maxwell has been called the ‘bits and pieces’ cricketer. Over the years he has contributed to his team and world cricket by giving them a fantastic show on the cricket field, and has proved that he is a lot more than that.