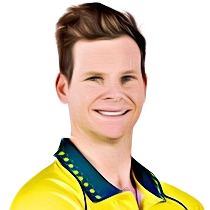 Smith has quite often obtained position among the top-ranked batsmen in the Test cricket format, as per the ICC Rankings. Smith has been referred as the "best since Bradman" because of his outstanding batting average in Test Cricket. He plays for New South Wales and Sydney Sixers in domestic cricket. He is also the captain of The RR - Rajasthan in the Indian Premier League (IPL).

Smith was part of ICC Under-19 Cricket world cup 2008 in Malaysia. He scored 114 runs and took seven wickets in four matches. Steve made his debut in first class cricket with New South Wales team against Western Australia in January 2008. He scored 33 in his single innings with New South Wales and the team won. He was also with the same team that won 2009 Twenty20 Champions League. They won final against Trinidad and Tobago at Hyderabad. Smith scored 33 runs and took 2 wickets. Smith has been part of the Big Bash League for a while in his early career days.

The White-ball cricket has also been a success for Smith although not as much as his Test statistics. In ODIs especially, he worked upon himself up the ladder as a premier batsman. The 2015 ICC World Cup was another milestone for Smith, as he was the first batsman to hit five consecutive fifty-plus scores in the world cup’s history. These were the last 3 matches being quarterfinal, semifinal and the grand finale.Till date he has played 125 matches and scored 4162 runs at a strike rate of 86.67 and also he has taken 28 wickets.

Steve Smith played 73 test matches and 131 innings with an average of 62.84. He made his debut against Pakistan in July 2010. He played some commendable innings in his career, however he started as an all rounder bowler who looked similar to Shane Warne by his bowling action around 2008. Smith’s talent was visible however very raw for the big stage. The tour of England in year 2010 marked his initiation in the test format. Smith batted at number 7 or 8 apart from bowling his legbreak. His selection for Ashes 2010-11 caught a lot of criticism after Australia lost the series, his career also lost brightness after being dropped from all formats of the game. Selectors thoughts the lad had better talent with bat than ball on which he rigorously started working upon and his hard work payed off well soon. During England tour 2013, people saw a new unorthodox skills bearing Steve who proved every critic wrong, although the team lost the series but Smith won all hearts and made his place in the team permanent. In the next Ashes Series that year 2013 he showed all his promising skills and made sure the last performance was not a fluke. He played some match saving innings later including the sealing century in Ashes at MCG followed by the impressive strokes in South Africa tour and by the subsequent year he made his spot in the ICC Test Rankings. Since then he held strong to his position and did not let his grip loosen. However, the 2018 ball tampering controversy shook the Australian Cricket and their two in form players Steve Smith and David Warner had to face an year of ban from all formats of Cricket. The whole year in exile was very tough for both players and the entire team as well. None the less, both made direct entry in the ICC Worl Cup 2019 Squad and took charge of their duties from exactly where they left it.

Steve Smith was remarkable from his debut in the IPL in 2012, that was the moment when Smith was not a regular in the Australian squad and was considered as a mid-order batsman and a part-time leg-spinner. By default, his designation in the IPL was the same, as and when he got snapped up by the Pune Warriors. Smith finished his season with 350 plus runs with a decent strike rate but without any fifty or hundred in that season – a classic example of his consistency displayed as Smith every now and then came out with some very impressive innings down the line. The 2013 IPL season was below expectancy and with the expiring contract with the franchise, Smith was onboarded by the RR - Rajasthan franchise in IPL 2014. His first season for RR (RR - Rajasthan) was again just average and not much big shows again, he was coming to bat at the 8-9 number, more of the team’s tail enders. His rising as an international player started to show reasonably good from 2015 season which saw an up in his stocks as an IPL batsman. Smith knocked it up with his maiden IPL hundred in 2016 for the Rising Pune Supergiant, one of the franchises created temporarily due to the ban of CSK and RR. Injury reduced his tenure that year but he bounced back firmly in 2017 as the captain of the squad and led the team to the finals which they lost with a close margin. The skipper did enjoy a reasonably good season with the bat. The 2019 IPL was Steve’s important competitive engagement after being banned by Cricket Australia for an year with ball-tampering allegations in March 2018. He had to skip the IPL season too that year but came back with an average tournament for the RR - Rajasthan. In the recent past, he recovered from an elbow injury followed by required surgery, Smith was in the beginning bit rusty but got his rythm as the season followed. Smith wasn't given the captaincy but eventually, it came to him at the end of the season. Smith emerged as a top-notch Test batsman may have held him back with the white-ball hitting a bit but he remains a trustworthy batsman whom RR - Rajasthan can rely upon on third spot in the batting order.

In Twenty20 Internationals, Smith could not have much of impact that he wanted to. Missing out on most of the T20 International series also was one of the reasons for that. On the contrary, his performance has been on a great show during the T20 league matches, significantly in the IPL where he even led the Pune Warriors franchise team to the IPL final in 2017.