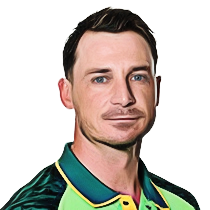 Dale Steyn is a cricketer from South Africa. He is regarded as one of the greatest fast bowlers in South Africa in Test cricket and one of the best of his generation in the world. He was born on 27th June 1983 in a small city named Phalawa.

Steyn while growing up in the small city of Northern Province was passionate about skateboarding. He used to spend a lot of time practicing skateboarding. Once he moved to the big city Pretoria Steyn took cricket seriously. With scary eyes, aching veins, and a chainsaw celebration style has made Dale Steyn one of the most fearsome fast bowlers in South African cricket history. His major strength in bowling is generating extreme pace consistently, ability to swing both ways, and sheer accuracy, especially outside the off-stump.

Steyn dominated the number one spot in the ICC Test ranking during the peak of his career for a record 263 weeks between 2008 and 2014. In terms of days, Steyn was number one for 2356 days, the most after World War II. Steyn has many laurels in his kitty like ICC Test Cricketer of the year in 2008, Wisden Leading Cricketer of the year (2013). He also was included in the ICC Test Team of the Decade at the end of 2020. In August 2019, Steyn said goodbye to Test cricket to concentrate on a limited-over game.

Dale Steyn made his debut in first-class cricket for Northern against Western Province in 2003. But he was not so impressive managing only 2 wickets against 43 runs in 9 overs. However, Steyn, improving his skill was selected in the South African squad in 2004 along with AB De Villiers against England and he had performed on only seven matches before making his debut for the country. Steyn had gone to England to mature his bowling in 2005, playing for Essex but he failed to create impact, managing 14 wickets only. But returning home after some hard work with bowling coach of Essex Ian Pont, Steyn had shown his class for Northers. Steyn also had a second stint with English county, playing for Warwickshire in the first half of the 2007 season. This time Steyn proved his mettle, capturing 23 wickets in 7 matches. Steyn has claimed 618 wickets in 141 matches and he had also claimed 284 wickets in 180 List ‘A’ matches.

Dale Steyn made his debut in One-Day International in 2005 for Africa XI against Asia XI in Asia eleven’s tour of Africa. Steyn managed only one wicket at the cost of 40 runs in 9.1 overs. However, Steyn who became the highest wicket-taker of South Africa, crossing Shaun Pollack in 2018, has participated in 125 ODIs and claimed 196 wickets at an economy rate of 4.87 including his best bowling figure of 6 for 39.

Dale Steyn made his debut in Test cricket in 2004 against England at Port Elizabeth. But his performance was ordinary in his maiden Test as he claimed 2 wickets against 117 runs in the first innings and managed one wicket at the cost of 29 runs. Steyn was struggling to prove to settle himself in his early years after his debut in Test cricket. He started thriving from 2007 onwards. He rose to fame between 2012 and 2014. But the 37-year-old cricketer had begun suffering from injuries simultaneously, especially when he reached 30. Steyn suffered from a groin strain in 2013 in Champions Trophy and then he was plagued by a side strain and rib-fracture in the very next year. Still, he played an instrumental role in South Africa’s first series victory against Sri Lanka. Dale Steyn has played in 93 Tests and claimed 439 wickets at an economy rate of 3.24 including his best bowling best figure of 7 for 51 in an innings and 11 for 60 in a match.

Dale Steyn made his debut in Twenty20 International in 2007 against New Zealand at Johannesburg. Steyn captured one wicket at the cost of 17 runs in 4 overs. South Arica won the match by 3 wickets. He has claimed 64 wickets in 47 T20Is at an economy rate of 6.94 including his best bowling figure of 4 for 9 runs. Otherwise, Steyn has claimed 259 wickets from 225 T20 matches at an economy rate of 6.82.

Steyn’s stain gun now is all set to launch in the limited-over game.