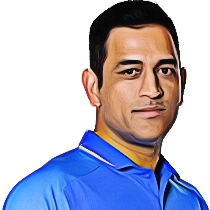 Everyone remembers the story of King Midas and how everything he touched turned into gold. In the Modern day, if there is one cricketer who can carry this title, then it is none other than our captain cool – Mahendra Singh Dhoni. This name has a lot of emotions attached to it, every time this guy stepped on to the field, millions of hearts would beat together. Each time Team India faced a middle-order crisis, every Indian sitting at his home would hope that this man would walk-in and India would win the match, this is the kind of belief people have had in him over all these years. From winning the two prestigious world cups to reaching the No.1 spot in test cricket, this man has led our country to many glorious victories in the past. It is almost unbelievable, how a lower- middle class boy rose from nothing and went on to become the bearer of a billion dreams.

Born to a middle-class family in Ranchi, Bihar on 7th July 1981, he did not have a glorious life to start with. Dhoni’s father used to work in Junior management positions at MECON. He grew up watching his idol, Sachin Tendulkar and was a huge fan of Adam Gilchrist. Initially he had keen interest in football and would play as a goalkeeper in his school team. Once he was sent to play cricket for a local cricket club by his coach, where he impressed everyone with his wicket-keeping skills and started playing as the regular wicket-keeper at the Commando cricket club, from there hi journey began and the rest is history!

It is hard to sum up all his achievements in one blog, so we handpicked some of the most glorious moments from his illustrious career. So, let us discuss why is he touted as one of the greatest players to have played the game.

A start that could be referred to as one of the most dramatic starts to a glorious career is what happened to Dhoni when he got run out for a duck on debut against Bangladesh in the year 2004. Despite having an initial hiccup, he was selected for an ODI series against Pakistan. Dhoni playing his fifth ODI international in the second match of the series went on to score 148 runs off just 123 deliveries surpassing the previous record of maximum runs in a match by an Indian wicketkeeper. This record did not last for long because he himself broke it a few months later by scoring a massive 183 * off 145 which eventually became the reason for India’s victory.

Dhoni arrived at a time when India was struggling because of lack of batting skills in the wicket-keepers, Players from the Junior team were brought in like Dinesh Kartik and Parthiv Patel, but they could never really make a mark for themselves. Then Captain Sourav Ganguly took notice of this Young boy from Bihar who had an impressive Ranji record and fierce batting skills, brought him into the team and made his ODI debut against Bangladesh at MA Aziz Stadium on Dec 23, 2004.Since then Dhoni went on to become one of the best wicket-keepers in the history of cricket by taking 601 catches and 174 stumpings. Dhoni surpassed Ricky Ponting to become number one ODI batsman in the ICC rankings on 20 April 2006 and became the fastest batsman achieve this feat, in just 42 innings. In the year 2018, he went past 10,000 runs becoming the fourth Indian and twelfth overall to do so.

Dhoni’s impressive performance in 2005 booked him a place in the test side. He made an impressive half-century off just 51 balls and there was no stopping from then on. He is the first Indian wicket keeper to complete 4,000 test runs. His highest score in Test stands at 294. And his career includes 256 catches and 38 stumpings, which are the highest by any wicket keeper. Under his captaincy, India reached the top spot in the ICC rankings for the first time in 2009. He is till date the most successful test captain with 27 test wins.

Dhoni made his T20 debut on 1st December, 2006 against South Africa at the Wanderers stadium. Since his debut, Dhoni has played in 98 matches from which he has 1617 runs under his belt including 2 fifties. His strike rate in the shortest format of the game stands at 126.13 and his career average stands at 37.6. His contribution to the T20 format is unforgettable after the maestro lead India to the first ever T20 world cup in cricket history, that too with a completely fresh team without any big names in the line up.

M.S Dhoni is the only Indian captain, who has won all 3 major ICC trophies – the T20 World cup in 2007, the World cup 2011 and the Champions Trophy in 2013. He has been away from International cricket for some time now after his last stint in the 2019 world cup, still he finished this decade as the most successful captain in ODI cricket in this decade. Records: All three formats combined • Dhoni has played most matches played as captain in T20: 72 • Dhoni has Most number of wins in T20 internationals as captain: 41 • He also has most T20 dismissals as wicket – keeper – 87 • He is the third captain and the first non-Australian to win 100 games in ODIs • He holds the record of most not outs in ODIs – 82 • He is the first player to surpass 10,000 runs with a career average of 51.09 in ODI cricket • He holds the highest individual score by a wicket – keeper in ODIs – 183* • He holds the record of playing the most number of matches as a captain who is also a wicketkeeper in ODI history • He is the first Indian wicket keeper to take 300 ODI catches and fourth in the world • He is the first Indian and fifth player in the world to hit 200 sixes • He holds the record of most unbeaten innings in successful run chases • He is the only wicket keeper in the world to surpass 100 stumpings and holds the record of most stumpings by a wicket keeper – 120 • Dhoni has 2 centuries batting at number 7, that is the most by any player in the world • Batting at number 6, he has the highest career runs in ODI history • Dhoni is the most successful Indian Test captain with 27 wins under his belt • Dhoni is also the only Indian captain who took India to the number one spot in Test cricket • Dhoni also holds the record of highest test score in an innings against Australia – 224 • Dhoni has hit 50 sixes in Tests as a captain which is an Indian record • He has played most international matches as captain – 332 • Dhoni is the only player in the world to have affected 161 stumpings till date Juggling between a Ticket collector’s job and cricket practice, he pushed all the odds aside to become one of the greatest players who played the game. It has been 16 years since he stepped into world of cricket with long streaks and fiery batting style. Since then, he has never looked back. His impeccable timing, mind-blowing accuracy and precision has turned him into one of the most intelligent cricket minds that exist. There was a time when none of us could understand why Sourav picked him and promoted him to the number 3 spot , then there was time when every spectator in the country would wait for a wicket to fall so that M.S Dhoni could walk in to bat. Such is his impact on our minds and our hearts. Currently, he is serving the Indian Army as a Lieutenant colonel and has been out of action for a while. He has not given a nod on whether he will make a comeback or not, whatever his decision maybe, he will always be etched in our hearts. The fact that he is indeed the best Indian captain ever is here to stay for a while, maybe a few years, maybe a few decades. Until then… Cheers To Thala!