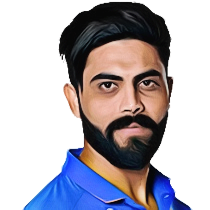 Ravindra Jadeja was born in Jamnagar, Gujrat in 1988 to Anirudh and Lata Jadeja. His father worked as a watchman for a private security service. He also has a sister named Naina who works as a nurse, his father always wanted his son to become an Army officers, but he had other plans. Jadeja lost his mother in an accident in 2005 which caused him a severe trauma that almost made him quit his game.

Jadeja has always been one of the poster boys for cricket news in the country, whether it is his fielding skills or for his iconic mustache, he always the talk of the town. He has a love for horses and is a trained horse rider. A disastrous outing at the 2009 world T20 turned Jadeja into a laughingstock, in a country where people are so emotional about the game.

He was nicknamed ‘Sir’ as a part of a joke and a few memes on the internet. Lot of things were not in his favor at that point of time and the only good thing was he was backed immensely by the skipper and his teammates and to everyone’s surprise he came back stronger than ever.

Jadeja made his debut in the under -19 team at the age of 16 in 2005. In the following year, he was picked in the Indian team for the Under-19 cricket world cup 2006 in Sri Lanka. That year, India finished as the Runners-up in the final where Jadeja took a 3 wicket-haul. In 2008, Jadeja was named the vice-captain of the Under -19 team in the World cup and that year India won the title. Jadeja finished the tournament with 10 wickets in 6 matches. Jadeja made his first-class debut in 2006-07 Duleep trophy where he played for the West Zone.

Jadeja burst into the scene after his all-round performance in the Ranji trophy in 2008-09 season, he scored 739 runs and scalped 42 wickets in the tournament. Soon, He got a call from the national team to play against Sri Lanka, but he had to wait till the final match of the series to make his debut, India lost the match but Jadeja scored a crucial 60 *. Since then Jadeja has booked himself a secure spot in the team and has been a key all-rounder for the team.Till date he has played 165 matches in which he has scored 2296 run and also has scalped 187 wickets.

Jadeja has represented Saurashtra in the Ranji trophy, in 2012 he became the only Indian and eighth overall to hit three triple-centuries in First class cricket. This effort did not go unnoticed and Jadeja got the much-awaited test cap. India was playing England at home and Jadeja got his debut in the fourth test match in Nagpur. Jadeja finished with figures of 3/117 in 70 overs. In February 2013, India won a historic test series against Australia at home, whitewashing the Aussies in the four-match series. Jadeja took 24 wickets in the series and dismissed Michael Clark five times in the series. Jadeja scored his maiden test fifty against England on 20th July 2014, he scored 68 runs off 57 balls and built a 99 run-partnership with Bhuvneshwar Kumar, this helped India post a competitive total on the board. In March 2017, He played in four test matches against Australia and took 25 wickets and scored two fifties, this effort earned him both ‘Man of the match’ and ‘Man of the series’ awards, respectively. On 5th August Jadeja became the quickest Left-arm bowler to reach 150 wickets. He along with R Ashwin became the first pair of spinners to be jointly ranked number 1 bowler in the ICC test rankings history.

Jadeja made his debut in the Indian Premier league 2008 for the RR - Rajasthan. He was instrumental in the team’s victorious season. The captain of the Royals, Shane Warne named him as the ‘superstar in the Making’. Since then he has played for the CSK - Chennai, Kochi Tuskers Kerala, and the Gujrat Lions.

During the 2009 T20 he was criticized by many people for his slow batting and got mocked for his playing style. He was strongly backed by the skipper and as a result Jadeja has been able to produce some excellent performances for the team. He is also one of those rare players who have been awarded a ‘Man of the Match’ for fielding efforts in a match. He is also regarded as the go-to bowler in crucial situations.

Jadeja is the first Indian player and eighth overall, to score three first-class triple centuries in his career. Jadeja is also the third cricketer for India to score 2,000 runs and take 150 wickets in ODIs. India has always been looking for that effective tail-ender who can finish well from both ends and Ravindra Jadeja fits into the puzzle perfectly.