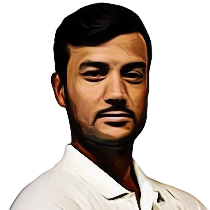 Mayank Anurag Agarwal was born on 16th February 1991 in Bangalore, Karnataka, India. He is an Indian cricketer who has represented India in Tests and ODIs since 2018. He is a right-handed batsman who opens for Karnataka in domestic cricket.

He came into the limelight with his performance in the Under-19 Cooch Behar Trophy in 2008-09 and 2010 ICC under-19 cricket world cup, where he stood out as the leading run-scorer for India. Mayank was adjudged Man of the series in the Karnataka Premier League in the year 2010. He also scored a hundred in the tournament. He completed his schooling from the Bishop Cotton Boys’ school, Bangalore, then did his higher studies from Jain University.

Mayank has played in 62 first class games, during which he has scored 4,849 runs with 11 hundred and 25 fifties. His batting averages around 48.97 and he has a top score of 304* under his belt. In November 2017, Mayank scored his first triple century in first-class cricket, where he made 304 not out batting for Karnataka against Maharashtra in the 2017–18 Ranji Trophy. It was also the 50th triple hundred scored in first-class cricket in India. Mayan scored 1,000 runs in first-class cricket in the same month, He became the leading run-scorer during the 2017–18 Ranji Trophy, completing the tournament with 1,160 runs.

Mayank was named in the Indian Test Team to play a series against the West Indies, but he did not get a chance to play. Few months later, in December 2018 he was picked again for a series against Australia after the exclusion of Prithvi Shaw due to an injury. He made his Test debut against Australia on 26th December 2018 and scored 76 runs in his first innings at the Melbourne Cricket Ground. This was also the highest score by an Indian cricketer on a Test debut in Australia, going past the previous record of 51 runs set by Dattu Phadkar, at the Sydney Cricket Ground in 1947. He played the 4th test as well and finished the series with 195 runs.

Mayank Agarwal made his ODI debut against New Zealand on 5th Feb 2020. He has not got too many chances yet and has played just 3 matches so far, adding 36 runs to his International career. He still has a long way to go in the One day format.

Mayank Agarwal made his Test debut against Australia at the Melbourne Cricket ground on 26th Dec 2018. Agarwal scored his maiden century in Test cricket in October 2019, in the first Test match against South Africa. He went on to convert this century into his first double hundred in a Test match, before getting out for 215 runs of 371 balls which included 23 fours and 6 sixes. Agarwal became only the second Indian opener after Virender Sehwag to score back to back centuries against South Africa right after he hit his 2nd Test hundred against South Africa. Mayank Agarwal hit his second double century in only his eighth Test match, at Indore against Bangladesh smashing his highest score of 243 in 330 deliveries with eight sixes In November 2019. He broke the record of Donald Bradman to become the second-fastest batsman to score two double hundreds, having achieved this feat in 12 innings.

Mayank Agarwal made his IPL debut against the Kochi Tuskers Kerala on 9th April 2011. He has played in 77 matches, during which he has scored 1270 runs at a strike rate of 128.54. He has 5 fifties to his name in the IPL.

Mayank can become one of the best openers has ever produced. He is one of those players who have the confidence to bat up the order and maintain a good strike rate throughout with effective stroke play. He is still young and raw and has many more matches to play for the country.