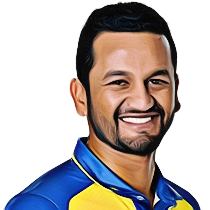 Frank Dimuth Madushanka Karunaratne was born on 21 April 1988 in Colombo, Sri Lanka. Better known as Dimuth Karunaratne Sri Lankan cricketer and current captain of the Sri Lanka Test and ODI cricket teams. He is a left-handed who represents the country in both Tests and ODIs and plays first-class cricket for the Sinhalese Sports Club. Dimuth plays as the opening batsman for Sri Lanka in Test cricket.

Dimuth did his schooling from the prestigious St Joseph’s College Colombo, which is renowned for producing many famous cricketers such as Chaminda Vaas, Marvan Atapattu and Arjuna Ranatunga. Dimuth stood out by making record-breaking scores for his school team. He eventually went on to play for the Under-19 and List -A games. He has played 122 List – A matches till date and has scored 3,667 runs which includes 6 hundreds and 22 fifties. Dimuth also brings his vast first-class experience into his game which speaks for itself. He has scored 11,780 runs in 160 matches, which includes 37 hundreds and 53 fifties.

In the year 2015 while the world cup was going on, Dimuth broke his hand in a practice session, which eventually cut short his stint in the world cup. Before that, he played in 4 matches and got to bat in only two matches, but after his injury his teammate, Kusal Parera.

Dimuth scored his maiden test century against New Zealand at Christchurch, hitting 152 runs off 363 balls in December 2014. A few months later, he scored a brilliant 186 off 354 balls against West Indies at Galle. Sri Lanka finished the match by winning the match by an innings and 6 runs. He went through a great phase in 2017, when he scored 1031 runs from 13 matches at which also includes his career best 196 against Pakistan at Dubai. He became the 7th Sri Lankan batsman to score 1000 runs in a calendar year.

Dimuth made his test debut against New Zealand at Galle International stadium on 17th November 2012. He has scored 4524 runs in 66 matches at an average of 36.78. He has 9 hundreds and 24 fifties under his belt and his highest score in a test match is 196 which came against Pakistan in Sri Lanka’s first ever day-night test. During this match he became the first Sri Lankan to reach landmarks of 50,100 and 150 in a day/night test match.

Ever since batting greats like Mahela Jawardane, Kumar Sangakara and Dilshan put down their guards, Dimuth has been the go-to opening batsman for the Sri Lankan team and to everyone’s satisfaction he has been able to justify his position in the team.