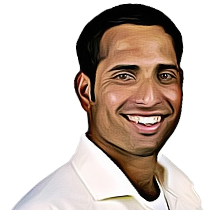 Vangipurapu Venkata Sai Laxman on born 1 November 1974. He is commonly known as VVS Laxman or just VVS by his fans. Laxman is not only a former Indian international cricketer but is also currently cricket commentator and pundit. He played as a right-hand batsman who was known for his refined stroke play, Laxman came down to bat as a middle-order batsman in Test cricket.

Laxman is one of those few players to have played 100 Test matches, that too without featuring in a One-Day Cricket World Cup. Laxman demonstrated a phenomenal piece of play with his masterful stroke play and fast scoring despite being a relatively slow runner between wickets. He fought a career-long battle to prove himself over and over again to find a place in the national team even after playing many great innings, on a consistent basis and in spite of him being revered all over the world as a great batsman. In 2002, he was named one of Wisden's five Cricketers of the Year.

Laxman was born in Hyderabad, Andhra Pradesh. Laxman is son to noted physicians Dr. Shantaram and Dr. Satyabhama of Vijayawada. Laxman is also the great grandnephew of India's second President Dr. Sarvepalli Radhakrishnan. Laxman completed his studies from Little Flower High School, Hyderabad. Even though Laxman joined a medical school for his undergraduate studies, Laxman chose cricket as a career. He got married to G. R. Shailaja, a Computer Applications graduate, on 16 February 2004.The couple has two kids –son, Sarvajit and daughter, Achinthya.

Laxman made his ODI debut against Zimbabwe at Barabati stadium on 9th April 1998. Since his debut, Laxman has played in 86 matches, from which he has scored 2338 runs including 6 hundreds and 10 fifties. He averages at 30.76 in ODI cricket.

Laxman made his debut in Test cricket against South Africa at Sardar Patel Stadium on 20th November 1996. Since his debut, Laxman has played in 134 matches and has scored 8781 runs at an average of 45.5. He has 17 hundreds; 2 double hundreds and 56 fifties and his highest score stands at 281.

Laxman made his IPL debut as the Deccan chargers captain against Kolkata Knight Riders at Eden Gardens on 20th April 2008. During his short stint, He played in 20 IPL matches, from which he scored 282 runs including 1 fifty.

Laxman's career took an ultimate turn in the 2001 in a home series against Australia. Laxman made 20 and 12 in the first Test at Mumbai, as the entire Indian batting line-up, with the exception of Sachin Tendulkar, fell down like a stack of cards resulting in a 10-wicket defeat. Australia was going through a streak by winning 16th consecutive Test and beat their own world record. In the following Test match at the Eden Gardens, Kolkata, Laxman played a match-winning knock which turned out be a defining performance to change the course of the series. After scoring 59 in the first innings, Laxman turned the table with an unbelievable knock of 281 runs in the second innings while following on under immense pressure and with Australia looking to nail a crushing 17th win in a row. While going at a fearsome rate, Laxman broke Sunil Gavaskar's long standing Indian Test record score of 236*. This remained the highest ever runs scored by an Indian batsman until it was bettered by Virender Sehwag's triple hundred against Pakistan in Multan in 2004, three years later. The innings also cemented a record partnership of 376 runs with Rahul Dravid who scored a determined 180 and together they battled through the whole 4th day. Laxman's performance was an example of pure courage: India had been on the brink of an innings defeat but went on to win the Test and the series, denying Steve Waugh's conquest of the "final frontier". This occasion was only the third time in the history of International cricket that a team had managed to win a Test match after being forced to follow on earlier. This went on to become one of the most celebrated stories of Indian cricket, and this particular innings is ranked sixth best Test innings ever by Wisden Cricketers' Almanack.