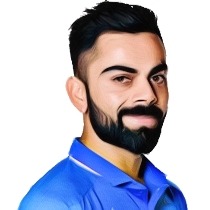 Virat Kohli, the captain of Indian Cricket Team since 2014(Test) and 2017(ODI & T20) was born on 5th November, 1988. Kohli was born in Delhi in a Punjabi family. His father Prem Kohli, worked as a criminal lawyer and his mother, Saroj Kohli, is a home maker. He has one brother Vikas and a sister Bhavana. Kohli was fond of cricket from the age of 3. He used to ask his father to bowl at him and he used to swing his bat against it. He joined West Delhi Cricket Academy at the age of 9 and was the first intake.

Among many great cricket players that Indian Cricket has given to World Cricket, Virat is one of the most promising among those. As his name Virat (meaning “Huge/Great”) is his persona and contribution in the sport. Kohli implemented techniques and skills from Sachin Tendulkar and fitness level of one of the highest standards followed by most athletes in the world and not just Cricket. Making him a deadly combination of skills and physical fitness Kohli proved out to be one of the most consistent in all formats of the game. Delivering some outstanding and jaw-dropping performances quite often.

Virat Kohli’s dedication to the game can be completely in his captaincy as well. He demanded more and more from his bowling squad even upto the extent of sacrificing a batsman to deepen the bowling line. Its because of Kohli’s persistence that now Team India’s bowling side is also considered among the fierce one like its batting order. This has helped Indian Test team to stay as long as 4 years consistently on rank 1 spot, which recently changed on 1st May 2020 and India Lost No 1 spot to Australia followed by New Zealand at No. 2 and India being on No.3.

Virat Kohli started playing cricket at the age of 9 with a newly formed West Delhi Cricket Academy. Kohli first played for Delhi Under-15 Team in October 2002 in Polly Umrigar Trophy 2002-03. He was the leading run scorer for the team with 172 Runs at an average of 34.40. Kohli became the captain of the team for 2003-04 Polly Umrigar Trophy and scored 390 in 5 innings in the competition. In late 2004 he was selected for Delhi Under-17 team to play for Vijay Merchant Trophy where he scored 470 runs in 4 matches. In February 2006 he made his List A debut for Delhi against Services but did not get chance to bat. In July 2006, Kohli was selected in India Under-19 team for its England tour. His average was 105 in 3 match ODI series and average of 49 in a 3 match Test series. Then subsequently in September 2006, Kohli averaged 58 in test and 42 in ODI series again Pakistan Under-19 in Pakistan. Virat Kohli made his first class debut for Delhi against Tamil Nadu in November 2006. He came into spotlight in December 2006 when he played against Karnataka team on the next day of his father’s death and scored 90. He went directly to funeral after he was dismissed. His Delhi team coach Chetan Chauhan appreciated his Attitude & Determination His life started changing from that moment, he showed higher levels of dedication in chasing his father’s and his own dream. In April 2007, he made his Twenty20 debut in the inter state T20 championship with an average of 36 runs. In July-August 2007 India under -19 team toured Sri Lanka in a triangular series between India – Srilanka – Bangladesh he was second highest run scorer with 149 runs in 5 matches. In February, 2008 he captained India Under 19 team in the ICC Under-19 World Cup 2008, he was third highest run scorer in tournament with 235 runs in 6 matches leading India Under-19 Team to win the World Cup 2008 and lift the trophy.In June 2008, Virat Kohli, along with his 2 other Under-19 Team members Pradeep Sangwan and Tanmay Srivastava were awarded the Border-Gavaskar scholarship.

In August 2008, Virat Kohli made his debut in Indian Cricket Team for Tour of Sri Lanka and the Champions Trophy in Pakistan. During Sri Lanka Tour both Indian Team openers Virendra Sehwag and Sachin Tendulkar were injured, Kohli batted as an opener for the entire series and scored 12, 37, 25, 54 & 31 in the 3-2 win for India in that 5 match series. From there the Delhi boy kept on leveling up his skills and played some extra-ordinary knocks making it loud and clear that he is completely ready for full time spot in the Senior Men-in-Blue Squad. The selectors had to choose him to play for Indian Team, he did not disappoint them and gave some jaw dropping performance in December 2009 against Sri Lanka in a nail biting run chase. In the ICC World Cup 2011 Final against Sri Lanka, Kohli stood on the pitch after early fall of wickets of the openers Sachin & Sehwag. He smashed 83 that evening which gave a strong foundation For M S Dhoni and Yuvraj Singh to take the team across the winning line. Soon he managed to get the record of fastest 9000 ODI runs and consecutively being the highest ODI run scorer for India in 2010,2011 & 2012 and also grabbed the ICC ODI Cricketer of the Year award in 2012. We all remember that CB Series decider for India chasing 321 against Sri Lanka, where Kohli not just took India across the winning line but also kept them alive in the series. Kohli scored a flashing 133* of 86 balls. On an individual note, Kohli gave his two hundred percent efforts to upskill himself into the most reliable, versatile and consistent batsman of his era and apparently the better of the Big Four. In October 2018, during the 2 out of 3 back to back centuries against the West Indies in ODIs, he crossed another milestone of becoming the fastest batsmen to cross the 10,000 ODI runs, leaving Sachin Tendulkar with a huge margin of 54 innings.

After his 3 years of Test Debut, in 2014 he was handed over the command of the Indian Test Squad, he already showed his excellent performance with the White ball, now it was time to test those with the Kookaburra. Team India was crushed badly by the Aussies in the entire tour, only Kohli was the man who was shining like a sprinkle in the deep dark. His century in the last match saved some shame to the team. But, sooner the better he kept on improvising with his skills, techniques and fitness levels.Till date he has played 86 matches in which he has scored 7240 runs.

Post Under-19 World Cup 2008 victory, Virat Kohli was bought by Indian Premier League franchise RCB - Bangalore for $30,000 on a youth contract. Virat made his IPL debut against KKR - Kolkata at the M. Chinnaswamy Stadium, Apr 18, 2008. He has been fairly successful with the bat but is yet to take his team to a league victory.