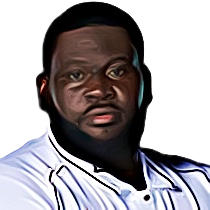 Rahkeem Cornwall was born on 1st October 1993 in Liberta, the third-largest town in Antigua. He is an all-rounder with right-arm off-break bowling and right-hand batting. Cornwall's maternal uncle Wilden Cornwall was also a professional cricketer as he had played in 53 first-class matches.

Naturally, cricket had come into Rakheem Cornwall's mind instinctively. He has represented the Leeward Islands, West Indies junior and senior side, Antigua Hawksbills, St. Lucia Stars, and St. Lucia Zouks in the Caribbean Premier League. Interestingly the 27-year old Rakheem Cornwall who is six-and-half-fit tall has already set a record as the heaviest player in Test cricket.

His weight is more than 140 kg! Cornwall's gigantic approach on the crease, especially high-action off-break bowling and the delivery from at last two meters away has always been an additional attraction to the cricket-loving people. Cornwall was awarded 'domestic cricketer of the year' in 2019.

Rakheem Cornwall's debut in first-class cricket was in 2014, against Jamaica in the Regional Four-Day competition, mainly as an off-spinner. Cornwall was not impressive in his first appearance as he had scored only 20 runs and bagged only one wicket giving away 51 runs. The all-rounder first was noticed by the Cricket West Indies selectors and board members when Cornwall struck 252 runs in the West Indies regional Super 50 championship and captured 10 wickets. That was in 2017. But already before that year, Cornwall was selected in the West Indies Board President's XI against touring India. He scored 41 runs and gathered 5 wickets. As a reward, Cornwall represented the same team against touring England in 2017. There also Cornwall made one important 55 runs, rescuing his side from 55 for 5 to 233 runs finally. During that phase chairman of the senior selection committee, Courtney Browne had stated that Cornwall was a prodigy and he should be given special care which must include a dietician before being mulled over for the senior side. Cornwall also had shown splendid performance with West Indies 'A' capturing 23 wickets at an average of 19 in Sri Lanka. In first-class cricket Rakheem Cornwall, playing in 64 matches so far has gleaned 2411 runs including a century (101) and with the ball, Cornwall has captured 304 wickets in as many matches including an impressive 8 wickets for 51 runs.

Rakheem Cornwall made his Test debut against India at Kingston in 2019 after Roston Case was ruled out of the squad due to injury. In his maiden appearance, Cornwall had captured three wickets in the first innings in 41 overs giving away 101 runs including Cheteshwar Pujara's wicket. Cornwall has taken part in three Tests so far and scored 14 runs. While as a bowler Cornwall, in three Tests so far, has scalped 13 wickets including 7 wickets for 75 runs.

Rakheem Cornwall, although has not yet made debut in Twenty20 International, has participated in 51 first-class T20 matches so far. He has scored 776 runs where his highest score was unbeaten 78 and as an off-spin bowler, Cornwall has captured 24 wickets with the best figure of 3 wickets for 10 runs.