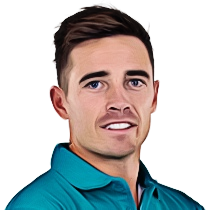 Timothy Grant Southee was born in Whangarei, Northland, New Zealand on 11th December. Southee has been an integral part of the New Zealand National squad in all three formats since his debut in 2008. He is one of the youngest cricketers to make his debut for New Zealand at the age of 19 in Feb 2008. He made his Test and ODI debut in the same year, on his test debut against England, Southee scalped 5 wickets and smashed a quick fire 77 off just 40 balls. Southee was the third-highest wicket-taker at the 2011 ICC World Cup taking 18 wickets at an average of 17.33. In a group stage match against England in the 2015 ICC World Cup, Southee surprised everyone by taking 7 wickets to reduce England to a mere 123 which the New Zealand Team chased down in 12.2 overs.

Southee also plays for Northern Districts in the Plunket Shield, Ford Trophy and Super Smash and Northland in the Hawke Cup. He was also named as New Zealand's captain for the first T20I against West Indies in place of Kane Williamson after he was rested. Southee led his team to a 47 runs victory.

Southee is known for his trademark late outswinger delivery, the most lethal delivery in his arsenal apart from the reverse swing and off-cutters which almost seem like a fast off-spin ball. He is one of those few bowlers in the world, who can be trusted with the old ball in the death overs.

Southee was 17 years old when he made his debut in the 2006 ICC Under-19 World Cup on 5 February against Bangladesh in Colombo, Sri Lanka. He also represented New Zealand against Pakistan, Ireland, the United States and Nepal in that tournament. He finished the tournament with 5 wickets at an average of 38.8 and 113 runs at 22.6. New Zealand finished as runners-up against Nepal. By the time Southee played in his second ICC Under-19 World Cup, he had already played two full Twenty20 internationals for New Zealand. He took 5/11 in New Zealand's first match against Zimbabwe and went on to take 17 wickets in five matches with an average of 6.64 and conceding only 2.52 runs per over. named the player of the tournament for this performance.

Southee made his ODI debut on 15th June 2008, at the Riverside Ground against England. Southee has played 143 matches in his illustrious career so far and has picked up 190 wickets at an average of 34.51. Even Though Southee is more reliable with the red ball, he has a particularly good economy rate of 5.47 and has 3 five-wicket hauls to his name.

Southee made his Test debut on 22nd March 2008 against England at the Mclean Park. Aged only 19 years and 102 days, Southee became New Zealand's seventh-youngest test debutant. England were playing a series in New Zealand when Southee came back home from the 2008 Under-19 world cup, he joined the Team after an injury of Kyle Mills who was ruled out of the third test match in Napier. He made a memorable debut by taking a 5-wicket haul and the fastest test fifty by a New Zealander coming off just 29 balls which included 9 sixes and 4 fours.

Southee was picked for the 2011 season by CSK - Chennai and he famously won them their first game by defending 6 off the final over, Southee played 2 more Matches before Doug Bollinger replaced him. The team, despite of winning championship did not retain him, and he was not picked for another two years. RR - Rajasthan bought him back in 2014 for INR 1.2 crore. Southee could not play much because of Royals' other strong foreign recruits. Then he moved on MI - Mumbai in the following year, In the first season with the Mumbai franchise, Southee played 11 games and finished with 9 wickets. In 2018, RCB - Bangalore picked him at his base price of 1 crore. He went on to become the prime death bowler for RCB and still is one of their mainstays.

Southee made his T20 debut against England at Eden Park on 5th Feb 2008. In the 70 matches he has played so far; he has 78 wickets in his kitty at an average of 27.0 and a five-wicket haul to his name.

Southee made his T20 debut against England at Eden Park on 5th Feb 2008. In the 70 matches he has played so far; he has 78 wickets in his kitty at an average of 27.0 and a five-wicket haul to his name.