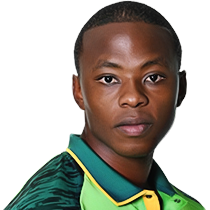 Kagiso Rabada was born in Johannesburg, Gauteng, South Africa on 25th May 1995. Also known by his nickname KG, Rabada is a south African cricketer who plays domestic cricket for the Highveld lions and for the South African national cricket team in all formats of the game. Kagiso Rabada played for South Africa in the 2014 ICC Under-19 Cricket World Cup. The team won the tournament and Rabada finished as the leading wicket taker in the side with 14 wickets to his name.

Rabada made his debut for South Africa against Bangladesh in July 2015 in an ODI, finishing with figures of 6/16 on his debut. He also became only the second player to take a hat-trick on debut in an ODI match. He eventually made his Test debut for South Africa against India in November 2015. In the year 2015, Rabada finished with figures of 13/144, leading his team to a victory in the fourth Test of England's tour of South Africa. During this match, he became the youngest South African to take a 10-wicket haul in a Test match, this was the second-best performance by a south African bowler after Makhaya Ntini's 13/132.

Rabada became the top ranked ODI bowler in the world displacing his teammate Imran Tahir in the ICC ODI bowler rankings and became second-youngest player at the age of 22, to top the ODI rankings after he took 4/39 in the third ODI match against England in 2017.

Rabada made his domestic cricket debut for the Gauteng in the CSA Provincial One-day competition against Border in December 2013. Eventually he was picked up by the National side to play in the 2014 Under-19 Cricket world cup. He finished as the best bowler from his side by taking 14 wickets at an economy rate of 3.10, which was also the second-best figure in the tournament. His best figures in the tournament were 6/25 against Australia A, which also turned out to be the tournament’s best figure.

Rabada made his ODI debut against Bangladesh at Shere Bangla National Stadium on 10th July 2015. He finished with figures of 6/16 on debut. Rabada became the second player to take a hat-trick on debut in an ODI match. Rabada scalped 4/39 in the third ODI match against England during a tour in 2017. Following his performance in the match, Rabada became top ranked ODI bowler in the world displacing his teammate Imran Tahir in the ICC ODI bowler rankings and became youngest player at the age of 22 to top the ODI rankings after Saqlain Mushtaq did it in 1998.

Kagiso Rabada made his test debut against India at Punjab Cricket Association IS Bindra Stadium on 5th November 2015. In the year 2016, Rabada took a 10-wicket haul against England at Centurion at the 4th test match of the series, he took 13 wickets including 2 five-wicket hauls. He took his second 10 wicket haul came against Sri Lanka at Cape Town in 2017. Rabada took 3/34 and 2/41 in the first and second innings During the first test of India's tour of South Africa in 2018 at Newlands. Following his performance in the match, Rabada became top ranked Test bowler in the world in the ICC Test bowler rankings by displacing England bowler James Anderson.

Rabada made his T20 debut against Australia at the Adelaide Oval on 5th November 2014. He has played in 24 matches so far and has 30 wickets to his name at an average of 25.4.

• Rabada became the youngest South African to take a ten-wicket haul in a Test match. • In 2018, he became the youngest bowler to take 150 Test wickets • He is the only Second player to take a hat-trick on ODI debut Rabada has achieved a lot, given his age and his international experience. He has risen through the ranks in a noticeably short span of time which just goes on to show that he is a natural talent. He is still young and has a lot of time and caliber to attain an irreplaceable position in world cricket.