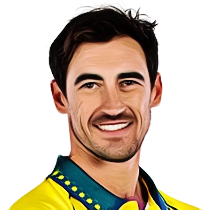 Mitchell Starc was born on 30th January 1990 New South Wales, Australia. He is a left-handed fast bowler who just loves to hit the deck hard. Mitchell Starc has created an aura of his own in world Cricket. The most surprising fact about Mitchell Starc is that the bowler who has dominated almost every great batsmen of his era was once an aspiring wicket keeper before he was spotted by a club coach who told him to ditch the gloves and learn bowling. The 14-year old lanky pacer had no idea that one day he will go on to become a spearhead in the Australian cricket team.

As a teenager, he had skills that many first-class players would envy. Playing under his coach Neil D’Costa, he extensively used to bowl at 135km/hr at the age of 16. Not only was he a great athlete, he was a great learner as a teenager and always had the zeal to learn the ethics of fast bowling according to his coach. He continued to rise through the ranks after joining the New South Wales Under-17 team. Soon, people started to notice his raw pace and his accuracy on the Australian pitches.

After some explosive performances at the junior level, Starc was finally picked for a debut for the New South Wales at the age of 19. Starc took 2 wickets in the match. In the next season, he grabbed 21 wickets from just 8 matches including a 5-wicket haul for 74 runs against Queensland. Talks about his consistency started to spread like wildfire after he took 26 wickets in 6 matches at an average of 8.12, striking once every 12 balls. Starc was awarded the player of the tournament, This was the beginning of an exceptional bowling career.

Starc made his debut in ODI cricket against India in Visakhapatnam on 20 October 2010. Starc was the best bowler in the ICC Cricket World Cup in 2015 which was co-hosted by Australia and New Zealand. He became the top wicket-taker in the tournament with 22 wickets while Australia won the title for a record fifth time. Starc was awarded the Man of the Tournament for his exceptional performance at the world stage.

Starc made his Test debut for Australia against New Zealand on 1 December 2011, in a two- match test series at the Brisbane venue. He took two wickets in the match and took two more in the second Test in Hobart. His debut Test was not the best of debuts and he leaked runs like a loose cannon and took only 2 wickets in the match. After this, He was left out of the Australian squad named for the series against India but was recalled for the third Test replacing spinner Nathan Lyon. Starc took four wickets in that match. In the Test series against India in 2012, he fell just one run short of a maiden Test hundred.

In the 2014 Indian Premier League (IPL), he was bought by RCB - Bangalore and quickly became their key bowler in the IPL 2015 edition. Starc missed the 2016 IPL season, , Starc moved on from RCB - Bangalore in order to put more focus on international cricket, On 27 January 2018, in the 2018 IPL auction he was bought by KKR - Kolkata (KKR) for ₹9.4 crore. Starc was ruled out of the 2018 IPL season due to injury and therefore was released by KKR later that year.

Starc Made his T20 debut against Pakistan at the Dubai International Cricket stadium on 7th September 2012. He has played in 31 matches and has taken 43 wickets with a career average of 18.65. He was also named in the 2012 ICC T20 World Cup ‘Team of the Tournament.