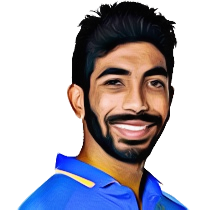 Jasprit Bumrah was born in Ahmedabad, Gujrat on 6th December 1993. His father Jasbir Singh Bumrah passed away when he was just 7 years old, His Mother Daljit Bumrah raised him and his sister Juhika alone, she was a school principal. Today he plays in all formats of the game, but he started his cricket career for the Gujrat Team and made his first-class debut against Vidarbha in October 2013. After a successful first-class stint and two good IPL seasons with the MI - Mumbai, he finally made is ODI and T20 debut for India against Australia in 2015. Bumrah is the third highest wicket taker in test matches in a debut year with 48 wickets in 8 matches. He is also the first Asian bowler to take 5 wickets each against Australia, England, and South Africa.

Over the years, Jasprit Bumrah has established himself as a mainstay of Indian Cricket. His perfect Yorkers, short balls and slower deliveries have already made menace on almost every famous cricket pitch in the world. Bumrah was named in India's squad for the Cricket World Cup 2019. He was named as one of the five exciting talents making their Cricket World Cup debut in 2019 by the International Cricket Council (ICC). Bumrah completed his 100th wicket in ODIs during India's match against Sri Lanka and became the second-fastest Indian to do so after Mohammed Shami. He was the highest wicket-taker for India in the 2019 World Cup with 18 wickets from 9 matches.

Bumrah made his First-class debut for Gujrat against Vidarbha in the 213-14 Ranji season. He picked 7 wickets on debut and eventually as the tournament ended, he emerged as the highest wicket taker from his team. He came into the limelight because of his unusual bowling action. In 2012, he made his first-class T20 debut against Maharashtra, where he bowled an exceptional spell with figures of 3 for 14.

Bumrah made his ODI Debut against Australia at Sydney Cricket Ground on Jan 23, 2016. Till date, he has played 64 matches and has 104 wickets with an average of 24.43. He has an excellent economy rate of 4.56 and his best figures are 5/27. In 2017, Bumrah bagged the record for the most wickets taken by any fast bowler in a bilateral ODI series against Sri Lanka, he took 15 wickets in the series.

Bumrah made his Test Debut against South Africa at Newlands on Jan 05, 2018. Bumrah could not believe in his luck when he took his maiden wicket of AB de Villiers, as he cleans bowled ‘the Mr. 360’. Bumrah took his first 5-wicket haul in the same series, during the 3rd Test Match at Johannesburg. He took 5/54 in that match. Bumrah took his second five-wicket haul against England. He was picked up to play against Australia in 2018. He took another five-wicket haul on the Boxing day Test. He became the first Asian bowler to take five-wicket hauls in Australia, England, and South Africa in the same calendar year. He became a part of the first ever Indian team to win a test series against team Australia in Australian soil.

Bumrah made his IPL Debut at just 19-years of age against RCB - Bangalore. It did not seem like a teenager was playing as he kept his nerves to achieve the figures of 3/32. He became the second bowler in the history of the tournament to have taken three wickets on his debut. He was brought back by the MI - Mumbai Team in 2014. Since then, Bumrah has been a mainstay player of the MI - Mumbai franchise.

Bumrah made his debut for the Indian cricket team in the T20 internationals on 26 January 2016 against Australia. He has played 49 matches and has 59 wickets in this format, his best being 3/11. He was the highest wicket taker in T20I in 2016 finishing the calendar year with 28 wickets.

• Jasprit Bumrah has most wickets taken by any fast bowler in a bilateral ODI series of five or fewer matches - 15 V/s Sri Lanka. • He is the Second fastest Indian to 100 ODI wickets. • He is the only the third Indian to get a hattrick in Tests India has always been looking for a death bowler who can keep hi calm and bowl in tense situations. Jasprit Bumrah has been the most prolific death bowler for India off late and his best performances include a lot bowling in the death overs. He has come a long way since his First-class days, to become one of the best bowlers in world cricket today.