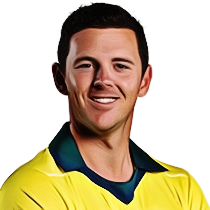 Josh Reginald Hazlewood was born on January 8th, 1991 in a small country town of Bendemeer, New South Wales. He is youngest of the three siblings in his family. He and his elder brother used to play fierce cricket as kids and by the age of 12, Josh was playing against grown up players of Tamworth. At the age of 17, Josh was selected to play for the New South Wales, making him the youngest pacer to represent the state. He made his first-class debut in November 2008 at the Sydney cricket ground against New Zealand. He was also the youngest member of the Under-19 squad of Australia.

Josh has often been called the modern-day Glenn McGrath. Comparisons are often drawn based on his close run up to the crease and more focus on precision than pace. His early stint in first-class cricket and his consistency soon landed him a debut in International cricket in 2010.

Hazlewood made his test debut during the 2014-15 series against India at home. He took 7 wickets in the match, giving away 142 runs. The interesting thing is that at such a young age he took the wickets of players like MS Dhoni and Cheteshwar Pujara twice in the match, he also got the wickets of Virat Kohli and Ajinkya Rahane. This was the match that announced Hazlewood’s arrival in the longest format of the game.

Hazlewood started playing for his state, New South Wales in the domestic First Class and List A competition in 2008. Then he went on to participate in the Big Bash League, he has been a part of the Sydney-based franchise Sydney Sixers since the year 2011 and they won the inaugural edition of the tournament.

Hazlewood made his ODI debut against England at the Rose Bowl on 22nd June 2010. He has played in 53 One day Internationals so far, and has bagged 87 wickets, with best figures of 6/52 in match. He has an impressive economy rate of 4.75 and has 3 five-wicket hauls.

Hazlewood made his test debut at the Gabba against India on 17th December 2014. He took 5 wickets in the first innings, giving away just 68 runs. He has played in 51 matches so far and has taken 195 test wickets at an average of 26.2. He has an excellent economy rate of just 2.78 and his best figures in a match is 9/115. He also has 7 five-wicket hauls to his name in the test format. Hazlewood is one of the few cricketers to record a five-wicket in their debut Test innings. He picked 5/68 against India. He has the distinction of picking up the first wicket, first five-wicket haul and becoming the first Man of the Match in a Day/Night Test.

Josh made his IPL debut for CSK - Chennai against DC - Delhi on 25th September 2020 at Delhi Capitals at Dubai International Cricket Stadium. He has played 3 IPL matches in which he has taken 1 wicket at a economy rate of 6.4.

Hazlewood has not got many opportunities in limited-overs cricket, he has made his mark in the longest format of the game, which will eventually shape him for many more legendary performances. Hazlewood has the caliber to finish his career as one of the best bowlers of his time.