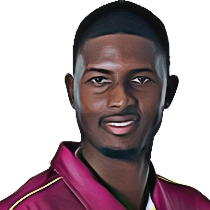 Jason Omar Holder was born in Bridgetown, Barbados on 5th November 1991. He is a Barbadian cricketer who is also the current captain of the West Indies Test team. Holder played in his 100th ODI match for the West Indies, during the 2019 Cricket World Cup. In January 2019, Holder was ranked as the number one all-rounder in the world according to the official ICC Test rankings. Cricket West Indies named him as the Test Player of the Year in August 2019.

The tall and lanky pacer was chosen by the West Indies cricket team as their test captain at a point when most of the senior players opted out of the team due to a major contract disputes with the cricket board. Holder became the youngest lead the West Indies team in January 2015, months before the 2015 World Cup. Holder was given the responsibility to lead a young West Indian unit to the quarter finals before losing to New Zealand. Following that performance, He was appointed the test captain on 4 September 2015.

Holder’s best performance came can be traced back to the quarter-final against England where West Indies needed him the most. Holder knocked out the English team out with figures of 5-19 after Windies were dismissed for a low score of 166 runs. He finished the tournament as the highest wicket taker for his team with 13 wickets.

Holder was part of the West Indies team for the 2010 Under-19 World Cup in New Zealand. He gave a good start to the tournament with 2 quick wickets against Pakistan in the first Group D match. He won the Lord Gavron award in 2009, an award given to an outstanding performer playing for Barbados Under-19.

Holder made his debut in One-day Internationals against Australia on February 1st, 2013 at the WACA ground. In July 2013, West Indies were playing the first match of a series against Pakistan, and Holder delivered with excellent figures of 4/13, which was then overshadowed by Shahid Afridi’s seven-wicket haul later in the match. In the third ODI of the same series, Holder smashed 19 runs off 9 balls to help his team to a tie.Till date he has played in 113 matches and scored 1821 runs.

Holder got his test cap against New Zealand on 26th June 2014 at Kensington Oval. Holder has played 43 matches till date and has scored 2012 runs at a strike rate of 59.23. He has three test hundreds to his name, one double hundred and 8 fifties. Holder also has 116 test wickets in his bag and has an impressive economy rate of 2.58, he has 7 five-wicket hauls and 1 ten-wicket haul to add up. Overall, he has been a consistent performer both with the bat and the ball.

Holder made his T20 debut against New Zealand at Sky Stadium on 15th Jan 2014 where he finished with figures of 2-34 in 3 overs. So far, he has played 17 matches and has 111 runs and 13 wickets to his name. He has got less matches to play in the shortest format, and still has a lot to offer.

Jason Holder has stood as pillar for the West Indies Team like the Captain of a sinking ship. He was the youngest West Indian player to be capped as Captain at the age of 23 years and 72 days, which by far is commendable given the situation of the team in absence of Senior players in the team.