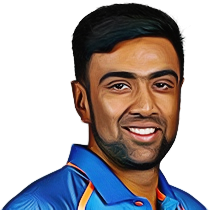 Ashwin was born in West Mambalam, Chennai in 1986 to a Tamil family. He is not the first cricketer in the family, his father Ravichandran played cricket at the club level as a fast bowler. Ashwin did his schooling from Padma Seshadri Bala bhavan and St. Bede's Anglo Indian higher secondary school. Then he did his B. tech in information technology from SSN College of Engineering. Ashwin’s career took from St. Bede’s cricket academy. Coaches Chandra and C.K Vijay noticed an early spark in the boy and helped him change his bowling style from medium pace to off-spin.

Ashwin is the only bowler in the world other than Ajantha Mendis who can bowl a carrom ball. Not only he is tremendous spinner but also an effective tail ender. R Ashwin has 4 test centuries under his belt. He walked into the team as an off-spinner and gradually built his image as a bowler who can bat.

After seeing the likes of Kumble and Harbhajan all these years, expectations were high from this young lad from Chennai. The shoes he was going to fill belonged to the legends of Indian cricket and naturally Ashwin did not have it easy during his early years. It took a whole good season at the domestic level for him to get noticed by the BCCI.

Ashwin started out as an opening batsman, he used to open for India -under 17 before getting replaced by Rohit Sharma due to lack of consistency. He was a medium fast bowler, but his coaches saw the off spinner in him and guided him to switch to spin bowling, following which he became a specialist bowler for Tamil Nadu and south Zone. His consistency at the domestic level was at its peak in 2009, he also led Tamil Nadu to the domestic One-day trophy. Soon, he landed a contract from the BCCI. He got called for the first two games in the series against South Africa as a replacement for Harbhajan Singh, but he did not get his test cap in that series, he had to wait for a little longer.

He had an impressive run in the IPL 2010 edition, which earned him a place in the national side which toured Zimbabwe in May 2010. He finally made his debut against Sri Lanka on June 5th, 2010. In November, New Zealand was playing India at home, India finished a 5-0 nil whitewash with Ashwin as the leading wicket-taker of the series with 11 wickets. Another highlight of his career was the 20-over final in the ICC champions trophy in 2013 where he took two crucial wickets, giving away just 15 runs in the four overs he got to bowl. He was also the member of the world cup winning squad in 2011 world cup where he made his debut in a crucial game against the west Indies, he finished with figures 2/41 in 10 overs.

He made his debut in the crucial format of cricket against West Indies at Arun Jaitley Stadium on Nov 06, 2011, since his debut he has played 71 matches and scored 2389 runs at a strike rate of 54.62.He has also scalped 365 wickets with his unique bowling style at a Economy rate of 2.84.

A bowler hailing from Tamil Nadu, Ashwin was picked by his Home side CSK - Chennai in the IPL in 2009. He played just two matches in that season and started get noticed in the following season because of his unique ‘carrom ball’. Ashwin took 13 wickets in that season. In the next season, he was re-picked by the Super Kings after a heavy battle at the auctions against the RCB - Bangalore. He proved his price was right by picking up 20 wickets in that season. In 2018, Ashwin was picked by the King XI Punjab and was named their captain. Since then, he has been looking to try his hands at the IPL trophy.

Ashwin made his T20 debut in Harare against Zimbabwe and took 1 wicket giving away 22 runs in four overs. This performance got noticed and he was selected to play a tri-series against hosts Sri Lanka and New Zealand. The team was travelling with two other spinners, Ravindra Jadeja and Pragyan Ojha. They were preferred over him and he had to wait for another chance to come. The next chance came in 2014 at the ICC T20 World cup and then at the Asia Cup in the same year. Ashwin’s performance earned him a place in the ‘Team of the Tournament’ for the 2014 World Cup.