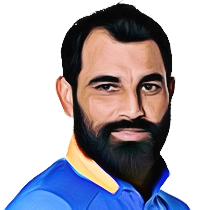 Mohammed Shami Ahmed was born on 3rd September 1990 in Amroha, Uttar Pradesh, India. He is one of the best fast bowlers India has now and is also considered to be one of the best in the world. Shami originally hails from Sahaspur village in Amroha, Uttar Pradesh. His father who was a fast bowler in his younger days worked as a farmer. Shami’s father recognized his son’s bowling abilities and took him to Badruddin Siddique, his first Cricket coach.

When Siddique saw him bowling in the nets as a 15-year old, he knew that he was not looking at an ordinary boy. So, he started preparing Shami for the UP trials. Although Shami was very hardworking as a bowler and never missed a training session as told by his coach, due political corruption he was not selected in the trials. The coach understood the situation and advised Shami’s parents to take him to Bengal in 2005.

Shami started playing for the Dalhousie Athletic Club. Shami got noticed by Debabrata Das, a former assistant secretary of the Cricket Association of Bengal While he was playing for this club. Das was impressed with Shami's bowling and signed him into his team, Town Club, with a contract of Rs 75,000. Das took Shami, to his own residence as he had no place to stay in Kolkata. Shami bowled exceptionally for Town Club but could not manage to seal a spot for the Bengal Under-22 team. Das approached one of the selectors, Samarban Banerjee, and asked him to watch Shami bowling in the nets. Banerjee was also impressed with Shami’s go at the nets and selected him for the Bengal Under-22 team.

According to Debabrata Das, Shami was never interested in the money and fame, his only high was the sound of the stumps falling. His raw pace and precision impressed each and everyone around him. Shami was then sent to the Mohan Bagan Club so that he could play against the top clubs. After joining the club, he got to bowl at Sourav Ganguly at the Eden Gardens. Ganguly was so impressed with Shami’s skills that he himself asked the selectors to “take special care of him”. Shami eventually got a place in the Bengal Ranji Squad in 2010.

Shami made his ODI debut against Pakistan on 6th January 2013 at the Arun Jaitley stadium. He has played in 77 matches so far and has scalped 144 wickets at an average of 27.29. He has an economy rate of 5.59 and his best figures in a match is 5/69 with five-wicket haul to his name.

Shami made his debut in Test cricket against the West Indies on 6th November 2013, in front of his home crowd at Eden Gardens, Kolkata. He took his maiden Test wicket in that match by getting Kieran Powell out. Shami finished with exceptional figures of 17–2–71–4 in the first innings of the match. In the second innings, his figures were 13.1–0–47–5. This was not any ordinary debut for a bowler, he took 9 wickets in that match which also is the most number of wickets taken by an Indian pacer surpassing Munaf Patel’s 7/97.

Shami made his IPL debut against the RR - Rajasthan on 8th April 2013 for the KKR - Kolkata. He was then, signed by Delhi Daredevils for the 2014 season but could play only a few matches in that season. Shami was bought by KXIP - Punjab team in the player auction in December 2018. He has grabbed 40 wickets in the 49 matches he has played so far.

Shami made his T20 debut against Pakistan at the Shere Bangla National stadium on 21st March 2014. He has played in 11 matches and has grabbed 12 wickets with best figures of 3/38 in a match. Shami has not got many opportunities in the shortest format of the game and is yet to demolish the batsmen with his raw pace in this format

Shami is a sheer piece of natural talent and hard work. Players like him set an example for other players hailing from small towns. He is true example of how you can face all kinds hurdles in life, be it financial or political you can still make it big if you believe you can.