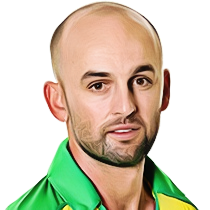 Nathan Lyon was born in Young, New South wales, Australia on 20th November 1987. Lyon is the record holder for most test wickets taken by an Australian off- spinner, he has 390 wickets to his name. In addition to be a bowler, Lyon also a lower order right-handed batsman. Nathan Lyon took his first international wicket off his first ball and became the 3rd Australian and 17th international bowler to achieve this feat in Test cricket.

When Lyon took the wicket of Kumar Sangakkara with his 1st ball in international cricket, he became the 14th bowler and 2nd Australian to take a wicket with the very 1st ball of an international career. His figures were 5/34 in the first innings, which made him the 131st player to take five wickets on debut in a Test match.

The most interesting fact about Nathan Lyon is that he began his Cricket career as a member of the ground-staff team at the Adelaide Oval after finishing a 4-year apprenticeship at the Manuka Oval in Canberra.

Lyon’s swift off breaks soon started getting attention from South Australia's Big Bash coach, Darren Berry and Lyon was picked to play for the Redbacks T20 team in 2010-11. After getting a good start in T20's, Lyon went to play for South Australia in the Sheffield Shield and the domestic one-day league. His exceptional skills as an off spinner got him selected for the 'A' tour of Zimbabwe in 2011 where he took 11 wickets and was awarded the Man of the Series.

Lyon made his ODI debut on 8th March 2012, against Sri Lanka. Although he is known for his abilities as a test cricketer, he has played in 29 ODI matches so far and has 29 wickets in his kitty with best figures of 4/44. His economy rate in One-day-internationals stands at 4.92 with a career average of 46.00.

Nathan Lyon made his test debut on 31st August 2011 against Sri Lanka. Lyon found his rhythm quickly and claimed a 5-wicket haul on his debut at Galle thus, becoming the 131st player to do so. Lyon played his first test in Australia against New Zealand in the first Test match of the series at the Gabba. Lyon scalped 4/69 in the first innings and then 3/19 in the second innings which took his match tally to 7/88. This is also considered as the best bowling figures from an Australian off spinner. During April 2013, Lyon was selected as the only spinner for the 2013 Ashes in England. Just hours before the first Test when he was dropped out of the team for Ashton Agar. However, Lyon was soon called back to play in the Third Ashes Test, and in the Fourth Test. Lyon finished with figures of 4/42 on the first day and reduced England to 238 in their first innings. Although he plays in all the three formats, he is majorly regarded for playing in Tests.

Nathan Lyon made his T20 debut against India on 29th January 2016. He has played just 2 matches yet and another match he played was against Pakistan in 2018. He has a wicket to his name and is yet to make a mark in the shortest format of the game.

Although he has not had a long career when it comes to limited overs cricket, but Nathan Lyon has been regarded as one of the best off spinners in test cricket. Today, he is one of the best bowlers Australia has to offer after the likes of Shane Warne and Stuart McGill.