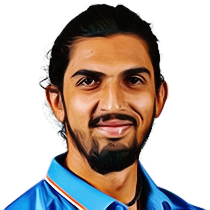 Ishant Sharma was born on 2nd September 1988 in Delhi. Back then, no one knew that this lanky boy from Delhi would go on to achieve so much in world cricket. Nicknamed ‘Lambu’ by his teammates, due to his tall figure. Ishant Sharma first got a call from the national team back in 2006-07 for the South African Tour. Ishant was 18 years old back then. Everything was arranged, but the board’s plan changed suddenly, and he was not picked for the tour. He is on the fastest Indian bowlers to hit the cricket pitch, who is also a rhythm bowler.

Ishant started off his Career from domestic cricket representing the Delhi Team. In 14 first-class matches he picked up 68 wickets, which included a five-wicket haul against Baroda on the opening day of the test match, Delhi successfully drew the game against Baroda on the fourth day of the match. During 2006-07, Ishant toured with the Under-19 team to England and Pakistan. He played six youth One Day International games and three youth test matches for India. In 2008, after a strong performance in Australia, He was picked to play in the IPL by the KKR - Kolkata for a winning bid of $950,000. This was the highest bid for any bowler in the tournament.

Ishant made his debut against South Africa at Civil Service Cricket Club on Jun 29, 2007. In March, 2012 Ishant underwent a surgery on his ankle and due to that injury, he missed a lot of matches. During a match against Australia in 2013, Ishant conceded 30 runs in an over, and became the most expensive Indian bowler. He came back strong in December 2013 by picking up 4/40 against South Africa. His best career figure in a match is 4/34 against Sri Lanka.

Ishant made his Test debut against Bangladesh on 25th May 2007 at the Shere Bangla National Stadium where he picked up just one wicket, then he was called for the tour of England in July 2007. In December 2007, India was playing Pakistan at home and Sharma was called up for the 3rd test match where he managed to pick up five wickets in the absence of spearheads like Zaheer Khan, Sreesanth and R.P Singh. This performance came at a very crucial time and thus, it earned him a place in the Indian team for the Australian Tour in 2008. Although he did not fare well in the earlier matches, he was retained for the third-test match at Perth. He bowled an exceptional spell To the Australians, especially Ricky Ponting and became a major cause of India’s victory. He finished the tour with figures, 6/358 with an average of 59.66. When Australia toured India in the same year for a four-match test series later that year and He left the Australians dumbstruck. He got movement from the cricket ball off the seam and took 15 wickets in 2 matches and helped India to a 2-0 victory and became the man of the series.

He made his debut for the KKR - Kolkata against the RCB - Bangalore at the M. chinnaswamy after KKR owner Shah Rukh Khan bought him $950,000 in the first edition. He has played 89 matches till date and has taken 71 wickets with career best figures of 5/12. He has played for teams like KKR - Kolkata, Deccan chargers, SRH - Hyderabad, Rising Pune Supergiants, KXIP - Punjab, and DC - Delhi.