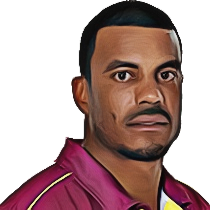 Shannon Terry Gabriel was born on 28th April 1988 in Trinidad and Tobago. He is a West Indian Fast bowler who is also a member of the Trinidad and Tobago’s first-class squad. The muscular west Indian bowler made his debut for T&T in 2010 and soon became the mainstay of the team’s pace attack. In June 2010, the West Indies cricket board founded the west Indies High Performance Centre to improve the quality of players between the age of 19 to 27 and Gabriel was selected in the intake of first 15 players.

During the 2010-11 first-class season, Gabriel played took 33 wickets in 14 matches for T&T. His performance in a match against Combined Campuses and Colleges is reckoned as his best where he took 7 wickets. The only problem with Gabriel was his inconsistency in line and length with the red ball, due to which he never really could threaten the batsmen until in 2016, when West Indies played Pakistan and Gabriel took his maiden five-wicket haul.

In the year 2017, Gabriel picked 9 wickets for 92 against Pakistan at Bridgetown to help West Indies register a famous win, He was also declared as the Man of the Match in this test. He also took a six-wicket haul against England at Leeds in the same year, this performance cemented his place in the Windies bowling attack.

In the year 2011, Gabriel was selected as a replacement for Ravi Rampaul, who was dropped due to his neck injury during the West Indies tour of England. On 17 May 2012, Gabriel made his international test debut against England at Lord’s, although he could not impress in his debut match and was sent home due to a back injury.

Gabriel made his test debut at Lord’s against England on May 17th, 2012 where he finished a bowling figure of 3/60 in first innings and 1/26 in the second. He has played 48 test matches, in which he has taken 144 wickets at an average of 30.76. He has 1 ten-wicket haul and 6 five- wicket hauls and an excellent economy rate of 3.4. He last played in a test match against England at Emirates Old Trafford, Jul 24, 2020.

Gabriel made his T20 debut against Zimbabwe at Sir Vivian Richards stadium, on 3rd March 2013. He has played 2 T20 matches till date and has 3 wickets to his name. He played his last T20 match in the same year on July 27th against Pakistan at Amos Vale Ground and has not got back to the team after that in the shortest format of the game.

The Muscular 22-year old boy who made his debut for the T&T in 2010 with his raw pace, has evolved with time to become a responsible bowler who knows how to pitch the ball with the correct line and length and can lead the pack when needed.