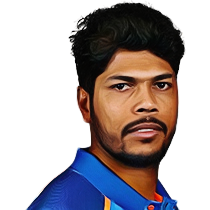 Umesh Yadav was born on 25th October 1987 in Nagpur, Maharashtra. He is a right-arm fast bowler, who adds a lot of muscle strength to his raw pace. Yadav started playing for Vidarbha at the domestic level since 2008 and became first player from the team to have played Test cricket. Yadav made his ODI debut against Zimbabwe in May 2010. Next year, Yadav made his Test debut against the West Indies in November. He became the highest wicket-taker for India during the ICC Cricket World Cup2015.

Hailing from Nagpur, Umesh was son to a coalminer so he had to earn so that he could feed his family, so he pursued a career in the Indian Police service. After he faced several rejections in the police force, Umesh Yadav shifted his focus to cricket only to make enough money to meet the month’s end. He started his career with one of the less talked about teams ‘Vidarbha’.

Umesh Yadav has always been one of the fittest athletes in the team and always had good built growing up which also added more strength to his bowling. His coach Pritam Gandhe, taught him the art of fast bowling and soon Umesh was called for a Ranji debut against Madhya Pradesh. He picked up 20 wickets at an average of 14.60. Bowling at a speed of 140kmph with accuracy regularly in that match earned him a lot of attention from the selectors.

Yadav made his ODI debut on 28th May 2010 against Zimbabwe. India was defending a score of 285, Yadav bowled eight overs while conceding 48 runs but could not take his maiden wicket. He Played in three matches in that series and took just One wicket. Yadav has played 75 matches and has taken 106 wickets at an average of 33.63 with an economy rate of 6.01.

Yadav made his test debut against west Indies on 6th November 2011. Yadav made his Test debut in the first match alongside Ishant Sharma in the first innings but failed to grab a wicket. In the second innings, India opened with the spinners and Yadav took two wickets for 36 runs and helped India to a five-wicket victory. Yadav also became the first cricketer to play for Vidarbha who went on the play Test cricket. India won the second Test, with Yadav finishing with 9 wickets in the series. He has played 45 test matches for India and has taken 142 wickets at an average of 30.26. He has three five-wicket hauls and one 10-wicket haul to his name.

Yadav made his debut in T20 cricket on 7th of August 2012 against Sri Lanka. In May 2010, Yadav was called to play for India in the World Twenty20 tournament in place of the injured Praveen Kumar, but he did not get a chance to play in the whole Tournament. Umesh did not really get too many matches to prove himself in the T20 circuit. Till date he has played in 7 matches for India and has 9 wickets to his name, his best figures being 2/19.

Umesh Yadav bowled at a speed of 152.5 kmph against sri Lanka in Australia in 2012 during a Tri-series, this is the fourth fastest ball by an Indian. In 2015 edition of the IPL, he became the third fastest bowler of the tournament by bowling at a speed of 150.1 kmph. Who would have thought that a coal miner’s son would go on to represent India in International cricket? Who would have thought that a team like Vidarbha would produce a world class bowler? Umesh Yadav is a true example of how dreams can come true if you work hard enough to achieve it.