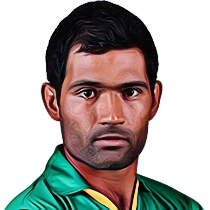 Asad Shafiq is a Pakistani international cricketer, who plays for the Pakistan national cricket team in all the three formats of the game. Shafiq also plays for the Karachi Whites, Karachi Blues, Karachi Dolphins, Karachi Zebras, North West Frontier Team and Sindh. He was born on 28th January in Karachi, Sindh, Pakistan, and hails from a Gujrati family. He is fluent in English and Urdu and can also speak a bit of Gujrati as well.

Asad Shafiq made his first-class debut at the age of 21 for Karachi Whites against Hyderabad on 21 October 2007 at Niaz Stadium. Interestingly, Shafiq was filling in for Karachi's Khalid Latif, who had been called up to play for Pakistan. Shafiq managed to score a century on his debut, scoring 113 runs from 183 balls. He scored his second century of the season against Faisalabad scoring 223 runs from 350 balls, batting for more than eight and a half hours, which is still his highest score in a first-class match.

He played in all 10 matches of the 2007–08 Quaid-e-Azam Trophy for Karachi Whites, and finished as their leading run-scorer with 745. Shafiq moved to the Karachi Blues team for the 2009–10 Quaid-e-Azam Trophy scoring 1,000 runs in a season for the first time. In 11 Quaid-e-Azam Trophy matches he scored 1,104 runs at an average of 64.94, which included 4 hundreds and four fifties.

Shafiq joined the Pakistan team at a crucial time when several players had recently been given bans by the Pakistan cricket board during the 2010 Asia cup. He was part of the 15-man squad selected for the tournament. He made his debut against Bangladesh at the Rangiri Dambulla International stadium where he could manage just 17 runs off 19 balls before getting out to Shakib Al Hasan.

Shafiq made his ODI debut against Bangladesh at Rangiri Dambulla International Stadium on Jun 21, 2010. Shafiq has scored 1336 from 60 matches which includes 9 fifties. His highest score in ODIs is 84 and has a strike rate of 67.51.

Shafiq made his test debut against South Africa on 20th November 2010 at sheikh Zayed stadium. He has played in 77 matches so far and has scored 4634 runs at an average of 38.62. He has 12 hundreds and 27 fifties to his name and his highest score in test cricket is 137.

Shafiq has always been a test batsman and has not got many opportunities in limited overs cricket. He provides the right amount of stability to the test side and has been a key player ever since his debut.