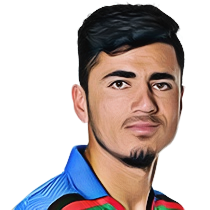 Having grown up in a mansion in Khost, Afghanistan, He seems to have the cosmos and spark of keeping up cricket as his most fundamental weapon. Mujeeb Ur Rehman makes an unflawed entry into the Afghanistan cricket team.

Mujeeb always had the incredibility to explore and evolve with his cricketer spirit. He basically used to squeeze a tennis ball between his fingers to bowl off break and carom balls or googly. Mostly to sharpen his skills he made all the hefty efforts to do so.

Mujeeb was moreover dedicated to his bowling path that started off in his 16 year of age. Mujeeb is too taken off with his ability to bowl. It is seen that he played a vital role in the match with Bangladesh thrashing them by 3-1. He can throw a googly with his bowling that can sweep a win in his pocket on a good day.

Mujeeb Ur Rehman Zadran was born on 28th march 2001 in Khost Afghanistan. He is a right handed batsman plus right arm off break bowler as mentioned above. His uncle name is Noor Ali Zadran, he is the only relative mentioned in the space by him. He made his Debut from the list A one that is Speen Ghar Region in 2017. His T20 debt was for Boost Defenders in 2017 again followed by a series of events that are there in his cricket career.

In May 2018, he was a part of the Afghanistan Squad for a special inaugural test cricket match. Basically, he was the youngest among all to perform in the test cricket in the age of 17. With a plethora of difficult to decipher variations he rose through the ranks to represent Afghanistan. His bowling average is about 75.0 in all the test matches.

He may have been a 17-year-old with a four-crore INR deal from a war torn nation that had produced only two IPL players so far, but Mujeeb was obviously unfascinated by the enormity of what he had done. In 2018, KXIP's think-tank also seemed to have invested a great deal of trust in the young man who, given the participation of many international stars, made it into the first eleven, making him the youngest ever.

Mujeeb Zadran's is the pattern breaker, as opposed to the traditional Afghan success story involving war-stricken and troubled histories. Growing up in a Khost house, Mujeeb developed a keen interest in cricket while watching World T20 2012 and started his T20 career on Feb 05,2018 against Zimbabwe at Sharjah Cricket Stadium.

In February 2018, the ICC declared Mujeeb as one of the ten players to take great leap in the cricket world cup qualifier tournament that was made his lead towards the other half of bowling into several other matches. There are other facts and figures as well that include his bowling availability that are his first class debut in the world cup, Mujeeb ended the landmark series picking up a record 17 wickets in the tournament, and this was just the beginning. He striked more of the wickets in the Asia cup as well with 20 wickets in 5 games. He was crowned upon the death over king through his bowling pace. Moving on to the other wicket taking hits of the Player, he had performed a 4 knock out strokes. He does uses the judicial value of the ‘Carom ball’ while his wrist spinning is a great plus point when playing an ODI as well world cup series as a whole.