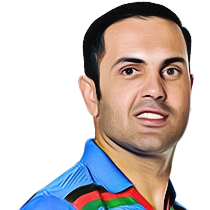 Nabi is an Afghan cricketer who has made his niche with right-handed batting and off break bowling.

He is basically an all-rounder top international cricket player. He had played a lot of 20 twenty tournaments with an aim to be excellent in his performance.

Nabi took his birth in Logar Province in Afghanistan, but his family migrated to Peshawar in Pakistan, fleeing from the Soviet–Afghan War. He had begun his career path in playing cricket in Peshawar at an early age of 10, and his family moved back to Afghanistan in 2000, where he began playing cricket with Mohammad Shahzad, Asghar Afghan and Shapoor Zadran, all of whom would later become important members of the Afghan national team. Nabi took his first step in his first competitive match in 2003, achieving his play for an Afghanistan team against the Rahim Yar Khan Cricket Association. Afghanistan's team was on a destitute position, but Nabi top-scored for the team with 61 runs. In the meantime, Afghanistan as a place didn't have their own cricket gear and had to rely on buying it from Pakistan and India.

Mohammad Nabi played about 124 matches in which he scored 2,796 runs. His highest score in a match stands at 116 runs and also holds a strike rate of 85.5 while his economy rate is 4.28 with 130 wickets. He is very focused in playing ODI matches as what his career defining.

He made his Test debut on 14th June,2018 against India at M.Chinnaswamy Stadium. He has played only 3 matches and scored 33 runs in total with an strike rate of 48.53. In Mohammad Nabi's perspective- "Test cricket is an important format that every cricketer wants to play. And its true, as whoever want to build a base be it balling, fielding or wicket keeping, has to do the net practice that is followed before going to the pitch".

He was the first Afghan cricketer to have been picked up by an IPL team rightly so. Sunrisers realized they had made a steal by pocketing 30 lakhs of a priceless commodity. Perhaps he is not as mysterious and eye-catching as Rashid Khan, or as flamboyant and dashing as Mohammad Shahzad. He is far from being as sharp as Dawlat or Shapoor Zadran, but he is and will continue to be the leading light of Afghanistan for times to come.

Nabi holds a record of the fastest 50 in twenty 20 internationals. Mohammad Nabi is an all-rounder from Afghanistan who has kept his play with his right-handed batsman feature and off break bowler. He performed a very vital role, Afghanistan's rise to the top level of international cricket, acing both the one day International in April 2009 and their first Test match in June 2018, he had built a strong base into the team. He had captained in the 2014 Asia Cup and in the World Cup as well. Nabi has also played in numerous Twenty20 franchise tournaments, it is a great achievement that he was the first Afghanistan player to be selected in the Indian Premier League player auction which was an add on to his career graph as a successful cricketer. He played against Scotland in the previous matches. Nabi even had leaded the ICC international cup in the UAE. He lost his form due to his age during the bilateral ODI series which is headed against Zimbabwe. Majorly Nabi took the responsibility in the ICC Twenty 20 2016 cup. He performed with all his form and effort scoring his maiden ODI century. He has enthusiastic bowling way like he played 3/36 in the Afghanistan v/s Ireland match, In ODI he played 4/30 against Ireland. On the other side he made an epic bowling when it was to be played with the RCB - Bangalore the score of his wicket taking was 4/11.