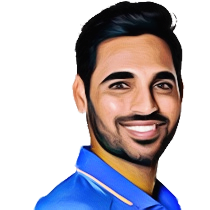 He was born on 5th February 1990 with a goal to build up a career in cricket. He is an Indian International cricketer who plays for uttar Pradesh. He is basically a right handed batsman and a right arm fast medium bowler. He bows his aspiration to become an all time in swinger bowler, who juggles up his value with an extensive performance. He was the first Indian bowler to take 5 wickets at a row.

He still continues to play in the Sun Risers Hyderabad Team that is associated with IPL. Moreover, his useful lower order right-handed batsmanship creates a bliss of arc for the other players as well.

Bhubaneshwar has that cutthroat service of his bowling that makes him different from others. Swinging the ball from both ways is his job to levy on. He believes on his constructive efforts which shows from his coaching as well as his net practice, of course. Practise makes a man perfect and so does the ability to learn some new moves in the cricket field.

Bhubaneshwar Kumar was included in the playing eleven of the first ever t20 match that was performed against Pakistan. If we explain about his will to gracefully throw off his way ahead through his bowling, he is the best amongst the rest as he took 3 wickets for 9 runs in 4 overs. The outstanding work with the right extract and element of cricket went on with him with his great work through an array of wicket taking strategy. During ODIs he took wicket in the very first ball, that he bowled and he was successful in dismissing Pakistan’s best hand Mohammad Hafeez’s wicket at one blow.

Wearing the no. 15 ODI shirt, Bhuvneshwar followed a routine of excellence with his bowling stiffness on the peak. He struck in his very first over against Pakistan on 30th December 2012 at MA Chidambaram Stadium which was a master performance in all aspects. He mastered the art of death bowling. After his debut as mentioned above against Pakistan cricket team, Bhuvneshwar followed the 2013 Champions League. After this he was very constant hence, he continued to be a regular part of the national side. In 2014, Bhuvi got his feet established in the Lord’s honors board. He was expected to be leading India’s pace attack in the 2015 World Cup but was unable to play more than a single match due to fitness issues. But he came back strongly and performed well in the 2017 Champions Trophy. In his ODI career he has taken 132 wickets at an Economy rate of 34.61.

He debuted against Australia on 22 Feb,2013 at MA Chidambaram Stadium.He has played 21 test matches and has taken 63 wickets. He has scored 552 runs with the help of three fifties. In 2013 he got the Border Gavaskar Trophy with all due respect. His opportunities were very less but he proved to dig his flag at his very first move in Tests and showed his true skills when he took his first five-for in the Nottingham Test in 2014. Another five-for followed in the next Test which India won at Lord’s which also put his name on the Lord’s Honors Board. Things appeared very fortunate and blissful at that time but soon the pressure of international cricket got to him. He failed to cope up with the extra workload and it started to reflect in his bowling. He struggled and didn’t take wickets as easily as he did before due to the volume of the work but somehow managed to grab his sanctity towards cricket as a whole.

He made his IPL debut against KXIP - Punjab at Punjab Cricket Association IS Bindra Stadium, May 08, 2011 played for Pune Warriors and till now he has played 117 matches and has taken 133 wickets at an Economy rate of 7.25 while he has scored 183 runs at an strike rate of 95.31.

Bhuvneshwar Kumar made a total of 38 runs against Australia in 2013, the highest by an Indian number 10 on debut. He is also the first Indian number 9 player to get three half-centuries in one series.