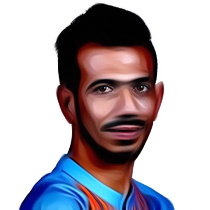 He was born on 23 july 1990 in the state of Haryana, he is basically an Indian cricketer and a former chess player. He was the second player in T 20 history, where he had taken a 6 wicket haul

It is fabulous to know that he represented India in the international chess competition He is basically a right handed batsman and right arm leg break bowler. He was in the RR - Rajasthan as a key player with his terrific talent to knock out in the majority of the overs.

Chahal was taken in the team by MI - Mumbai in 2011 and he played only 1 IPL. During the last 3 overs, he helped MI - Mumbai too defend over RCB - Bangalore with a good run of 139 and lift the title with all triumph, he was also bought by the IPL Players Auction at a best price of Rs 10 lakhs. Moreover, he got the Man of the match award in a match against Delhi Daredevils in the 2014 IPL. Chahal has a bright domestic career as he was named in the cricinfo IPL 11 for the entire season. Chahal had kept a strong corner for his dedicated playing with his bowling wicket hauls at a stretch. He also made his best score in a match against Australia and in that play he had fine knocks through his bowling capacity which is a believer.

His debut match was with Zimbabwe at the Harare Sports Club on the June 11, 2016 date which is yet to be remembered. And played about 52 matches from which he took 91 wickets at an Economy rate of 30.54.

He began his spell with RCB playing all 14 games in the League. Chahal was nominated for the Emerging Player of the Year, which he lost to Axar Patel, although he finished with just 12 wickets. The next two seasons saw Chahal develop as a player-picking up 44 wickets, and becoming one of the critical cogs of RCB. He has gone past Vinay Kumar in the 2018 edition to become the top wicket-taker for the Bangalore.

His success in the game's shorter format and firsthand knowledge of Virat Kohli culminated in his induction into the Indian team-first for the game's Twenty20 format, and then the 50-over game. The mid2016 tour to Zimbabwe was the perfect opportunity to infuse fresh blood and Chahal took both hands on his chances, impressing in both forms of the game. Having shone at his first opportunity, Chahal took his game a step further when England came to visit during the 2016-17 season. His six-for25 figures in the Twenty20 international are the second highest in a T20I match ever for a bowler. Aptly, it came to his second home, Stadium M Chinnaswamy.

Reason behind quitting chess: The main reason at the back side of Chahal leaving chess was about he not finding any sponsors. To make a career in chess, Chahal was needing INR 50 lakhs per annum. But the dearth of a sponsor didn’t allow Chahal to reap fruits in chess, he still plays chess as a hobby. Started as a medium pacer: Initially, Chahal used to be a medium pacer but later he moved all his conscious to leg spin and has mastered the art. His favourite play: It is both cricket and chess, Chahal also likes to watch football and is a huge follower of Real Madrid and famous footballer Cristiano Ronaldo. He was also a mighty fan of Shane Warne and used to look up to him, how he used to bowl or bat with the fierce rendition. He played 23 ODI as well as 20 T20’s. He is always a crackerjack with his bowling hit on the pitch. Now, tell us your views on this great cricketer.