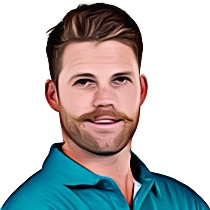 Lockie is always a dedicated soul, who has made the entire team’s head high. Lockie was one of the twenty players, who was awarded a new contract in the year 2018-2019.

He created few of the best records in his career. On the other side, he is the second player in the history of international cricket who has taken two wickets in the first two balls, while he is playing the match. He is one of such player who hits the base tremendously with high speed. It was his ability to articulate that raw pace. Which simultaneously handed him a First-class debut in 2012-13 and few seasons later, he shone brightly with his attributes reaping success in the most gigantic way. Ferguson had his own fame and goodwill during the 2014-15 first class season where he bagged 21 wickets in few of the core matches. He followed the performance with 31 wickets in the following season, propelling the selectors to take a note of him.

He was added to the ODI squad for the series against Australia on Dec 04,2016.He has played in 37 matches and has taken 69 wickets at an economy rate of 5.46. On 5th June, 2019 he played against Bangladesh, following the world cup ICC named Ferguson as the rising star of the squad due to his power pack performance. He was also named in the team of the tournament due to his dedicated play in the matches. Even if there is some injury, he was always up for the cricket countdown.

He has played only a few of the test matches which were iconic where he scored well with his dedicated play. He added in an interview saying "Gutting, isn’t it," Wagner said after the first day's play, about his teammate's injury. "It's just one of those things. It's pretty heart-breaking for him. I know he'll be devastated as well. We all obviously get right behind him ... He's a quality player and we would have loved to see him bowl more and see what he could have done." His patience towards work was on his priority list. Also, his perseverance and hard work showed from his performance. It is seen that Ferguson broke down after bowling just 11 overs while playing test cricket in Perth. Furthermore, he always concentrates on his fitness that includes his warmup sessions.

The growth of Lockie Ferguson as an express fast bowler bought by Rising Pune Supergiant (RPS), who secured him in 2017 with a Rupees fifty lakhs base price touch. Despite only having played a handful of matches, the IPL scouts were fascinated by his raw pace and clever variations.

The 28 year old master played about 36 one day internationals and 8 T20 matches as a whole for the black caps. On the domestic side he had taken almost 153 wickets in total which is a huge number for a cricketer. On the other side Lockie Ferguson had hosted England for two test series after he switched to the New Zealand team at a go. He got man of the match award in ODI as well as IPL. His bowling rank in T20 is 79 whereas in the world cup his position is 9th. New Zealand, Auckland, Derbyshire, New Zealand A, KKR - Kolkata, New Zealand XI, Rising Pune Supergiant. These are the teams he has worked into apart from that he is also included in the world cup team. Other points about him He has played almost 37 ODI matches in his career span which had few of the victory as well. He played 9 world cup’s with his deliverability in it. He played 9 tests as well with a full fledged association into the matches. Lockie Ferguson does not smoke but drinks sometimes. During his school days he won the national school fast bowling competition. He took his first 5 wicket against Otago As an overall player this leg spinner acer has created a beauty in the gaming pitch with his turbo speed and still continues to play fabulous innings against other teams.