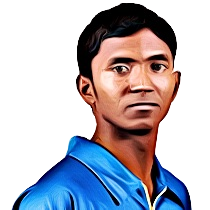 Akila Dananjaya is a professional all rounder cricketer, who plays all forms of game for the national team. He was born on 4 october,1993 in Panadura, Sri Lanka. At the age of 18, he was picked up by the Sri Lankan T20 squad for the 2012 world Twenty 20 match. It is said from an unknown source that he was suspended from bowling in the international matches due to some critical matter that included a question on his bowling ethics, which was later corrected by the federation coach.

ICC basically banned Dananjaya from the matches for about 12 months of duration, after his bowling action was illegal in all forms, as mentioned above as well.

As we all do not know, he is son of a carpenter from Moratuwa. He married his long-time partner Nathalie Tekshini on 22nd August,2017. It was a closed called ceremony that duly included two of his cricket mates as witness.

He has played 36 ODI matches since he made his debut against New Zealand at Mahinda Rajapaksa International Stadium on Nov 12, 2012. He is basically a right arm off-spin bowler or a right arm off-break bowler. His variety includes, leg break, googly, doosra, a carom ball and a stock off spinner. His control over his bowling is his best point amongst others.He has taken 51 wickets at an economy rate of 5.1 in 36 matches.

He has played 6 test matches since his debut against Bangladesh at Shere Bangla National Stadium on Feb 08, 2018 and has scalped 33 wickets.

His one-day international debut was in the year 2013. On the other side of the coin, he was fetched by the CSK - Chennai team as well, for the sixth season of the tournament.

Dananjaya made his international T20 debut against the same opposition that is New Zealand, he picked up two wickets in the match. He was also picked up by the IPL franchise that was his call for the high peak stint of his career. His best play was in the T20 world cup that was just before he is getting deselected for the other matches after his wrong ball image. It is very unfortunate that he got to play only a handful of T20’s. Here are the actual stats of how much he has played. He has played in 22 T20 matches and took 22 wickets in them.

He took around 6 wickets for 54 runs in total that was against India in 2014. Basically, this debut ODI had the best bowling figure till date. He was there in the ODI squad after 5 years in the Zimbabwe tour in the year 2017. In the first match he took his maiden ODI wicket by dismissing Craig Ervine. In the ODI his score was unbeaten 50 off 72 balls that mainly did not help Sri Lanka to win the match but on the other side, Sri Lanka was able to score 200. His test record was 8/44 which is quite decent. It is also heard that in May 2018 he was given a national contract by the Sri Lanka cricket federation.