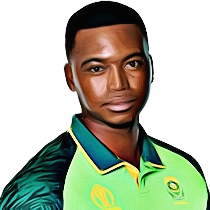 Lungisani Ngidi also popularly named as Lungi Ngidi is a South African cricketer, who was born on 29 march, 1996 in Durban KwaZulu, Natal. It is said that he was named, as one of the five cricketers of the year by the country cricket board.

Ngidi is famous for his pace attack, but on a bit laid back form, due to his injury he is unable to perform his best with the counterattack he does. He also missed the 2019 play into the huge Indian Premier League with a side strain that has stopped a bit of his belief. Injuries has been part and parcel of Ngidi's career and his confine flare-up resulted in the speedster dodging off a few matches in the showpiece 2019 World Cup – In the following tournament to forget for himself and his team, it was not that easy but he played his part of innings. He featured in only one season for CSK in the IPL, in the year 2018 it followed. When fit, he is an automatic selection as one of the pacers and will add much-needed firepower to the side. He will have to compete with Australia's Josh Hazlewood for a spot.

Ngidi attended Higbury Preparatory school that is located in the suburbs of South Africa. Ngidi also received a Scholarship to attend the Hilton College School. Ngidi was not only an all rounder in cricket but he was keen about playing other games as well, that fascinated his urge of participating and learning more of the games. Ngidi represented Hilton at Rugby for almost 3 years and made a win of his choice with this game. It is validated from an unknown source that Ngidi joined Bachelor of Social Sciences degree in the Industrial Sociology vertical from University of Pretoria Institute.

Lungi has played in 26 matches and has scalped 53 wickets at an economy rate of 5.56 with 1 five-wicket haul. His best figures in match stands at 6/58.

He made his IPL debut at Maharashtra Cricket Association Stadium on April 30, 2018 against DC - Delhi. He has played 7 matches and took 11 wickets with an Economy rate of 6.0.

He was included in the Northerns Cricket Team, to favour in the 2015 Africa T20 worldcup. He was also named in the Benoni Zalmi’s squad for the T20 global league participation. The match that was supposed to be held in August 2017 was cancelled and forwarded for the year 2018 from scratch. More surprisingly with a hand of excellence, he was selected in the Tshwane Spartans squad for playing with them on a bigger front again. The series name was Mzani super league T20 tournament.

This guy with flying colours has not only made us proud by performing with a perseverance of doing something king size but once when he played in the International T20 series in 2017, where he took about 6 wickets in total, his average run rate was,7.33. Ngidi belongs from a very poor background that is below the line but his father supported him a lot with the atmosphere of cricket game that he was into with all his heart and dedication. 3) Earlier in his career, Lungi Ngidi expressed his desire and utmost interest to bowl alongside South African speedster and a renowned player Dale Steyn. Though he hasn’t played along with Steyn in his career til now but he now has has the luck and fortune favouring his stars therefore he was replaced by the injured pacer in the squad. Meanwhile, he will also be playing his first game after his debut series against Sri Lanka way back in January. 4) He is the guru of injury it seems, It is said from a source that he sustained a left abdominal muscle injury which made him step out of the series.