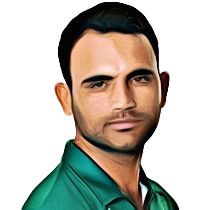 He is a Pakistani cricketer and a former Pakistan Navy sailor; he mainly plays for the Pakistan National cricket team and Lahore Qalandars in the Pakistan Super League. He was born on 10, April, 1990. Moreover, on 20th July 2018 he became the first batsman for Pakistan to score a double century in a one-day international match. After two days he became the fastest batsman to score 1000 runs in the ODI. He is basically a left handed batsman

It is seen from an unknown source that Fakhar Zaman was very much into his cricket practise hence he was playing for Karachi for quite some time in the Navy cricket team in the inter departmental matches. Moreover, he was first identified by the Navy coach, his name was Azam Khan, when he was getting over his net practice in the year 2013.

He basically became the second highest scorer in the 2016, Pakistan Cup. On the other side he managed to impress the selectors, who were there for the Quaid-E-Azam Trophy. This tour and journey went on and on with his hit of passion for team and he got selected in the Pakistan Super League. He was also closely monitored by the great match retriever Brendon Macellum. He was soon noticed by the Pakistan coach Mickey Arthur as well during a training camp, when he was playing with all his dedication and passion during one of his match. He is a left handed batsman and a slow left armer when he is playing for any series. His throw and pickup is great in all perspective with a professional hold to it that makes the opponent confused hence giving the opponent no chance to escape the loss.

He made his ODI debut by playing against South Africa again in the Champions trophy on 7 June 2017, scoring 31 runs in total. In the final against India, Zaman edged to the wicket-keeper for a different decision altogether, when he was on 3, but survived as it was a no-ball. He had to take such score on the pitch. After that, Zaman went on to score his best of scoring by hitting the maiden ODI century and helped Pakistan post a total of 338. India batting second warped and Pakistan won the match by 180 runs to become the mighty winners of the Champions Trophy for the first time in the history, it was also possible because of Zaman’s bowling score. Zaman was adjudged man of the match for his brilliant batting performance. Zaman and Azhar Ali's partnership in the match was 128 runs not out and that made them go far off with the strike rate in the field ,this was very surprising, as it made Pakistan’s highest opening partnership in the Champions Trophy history for Pakistan, and the highest opening partnership in an ODI for Pakistan since 2009. He has played in 46 ODIs in his career and abled to score 1958 runs.

He played 3 tests in his career since making his debut against Australia at Sheikh Zayed Stadium on Oct 16, 2018.

In March 2017, he was named in the Pakistan’s limited overs for the matches that were headed against West Indies. He also made his T20 international debut for Pakistan against West Indies on 30th march 2017, which was a grand match for him as a whole. Moreover, this trail continued, and he was named in the Pakistan one day international for the 2017, Champions trophy. He has played in 34 T20 matches. Moreover, he continues to play his part with his unique bowling as well as batting style.

In May 2018, he was named in the Pakistan’s test squad for their exclusive tours to Ireland and England. List goes on and on as on 8th july,2018 Fakhar scored 91 runs in total in the Tri-series match finale that was laid against Australia. He was also named man of the match and series in the same match. On the 20th July 2018 in the ODI against Zimbabwe, he became the first batsman for Pakistan to score double century as a whole, hi runs were 210 not out. As this continued Zaman became the fastest player to score the maximum that is 1000 runs in ODI.