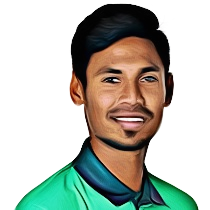 He is a country captivating person with all his cricket playing availabilities. He was just 19 year old when grabbed eyeballs. He was born on 6 september,1995 in Satkhira, Khulna Bangladesh with a dream too become an all rounder cricketer. His education was affected in this case when he started grabbing his niche of following his dream. He is the youngest among all in his family. It is known that his father loved watching cricket matches. Prior to discussing over his bowling talent and what all are the areas that he can work upon, he played with a tennis ball to hold a grip even when stuck in the death overs.

It is quoted in an unknown source that he used to take inspiration from the great Pakistani Pacer Mohammad Amir as his best fan of all time. He followed his tricks to combat all the opponents through such length and pace.

On 15 March 2019, while he was travelling with the other Bangladesh players. He was moments away from entering the Al Noor Mosque in Christchurch when there was a critical terrorist attack that shook the country earth. Still he managed to marry his love and got married on 22nd march, this was the only way to get away from the fatal attack and that state of mind.

He debuted against India at Shere Bangla National Stadium, Jun 18, 2015. On 5 July 2019, in a match against Pakistan, Mustafizur took his 100th wicket in ODIs. He beautifully finished the entire tournament as the leading wicket-taker for Bangladesh, with twenty dismissals in eight matches. He played in the World Cup as well for which he was again acclaimed. In June he toured to India for three One Day Internationals. He took about 5 wicket haul of 9.2 overs in the first match, where he showed his real signs of his incredibility. Moreover, Bangladesh won the match and Rahman became the 10th bowler in the history of ODI taking 5 wickets on an average.

He started his test journey against South Africa at Zahur Ahmed Chowdhury Stadium, Jul 21, 2015 and till now, he has played 13 matches in which he has taken 28 wickets at an economy rate of 3.2.

Rahman was drafted by the SRH - Hyderabad. He was named as the “Emerging player of the year” in the tournament.He has played 24 matches by which he acquired 24 wickets.

He could not contribute much in the T20 , though he bowled economically with the required average and wicket taking rate in the entire match, which made both sides sharing a win. Bangladesh again played for their flag and dignity with Zimbabwe in four T20s. Rahman played in the first two matches, which they won with all pride. It is said from an unknown source that while bowling in the second T20I against Zimbabwe in January 2016, Mustafizur injured his shoulder for which he couldn’t play few of the following matches. He played almost 41 matches in which he ha taken 58 wickets,

A remember the name's instant thing happened for Mustafizur, when he picked up 11 wickets in his first two ODIs to derail India. People call him as the Fizz as many call him since then has seen many ups and downs in his career. His international career has been overwhelmed by all sorts of injuries and the best thing Bangladesh can hope for is an injury free World Cup for him.