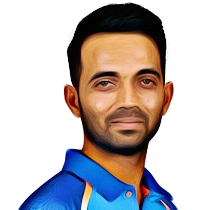 Ajinkya Madhukar Rahane born on June 6th 1988 is an Indian Cricketer. In the post Sachin Tendulkar era of Indian Cricket, where dressing room is now full of young vibrant men. Among them there is a simple, composed and talented player Ajinkya Rahane.

Born in a middle class family of Dombivli area of Mumbai. His family has always been supportive of his love towards cricket. Lack of facilities and resources, Rahane started his career on matted pitch in Dombivli. He worshiped cricket like anything and basis of his good skills of the game cleared his path from junior cricket to Ranji level.

Rahane performed well in Under-19 against New Zealand in early 2007 with two centuries. That tour saw some great future batsmen like Virat Kohli, Ishant Sharma, Kane Williamson, Tim Southee, Ravindra Jadeja and Trent Boult. Rahane then came in the spotlight and was given opportunity to play in first-class format in Mohammed Nissar Trophy in Pakistan. He was new to the first-class cricket until this tournament.

Two centuries in two consecutive matches in the Emerging Players Tournament in Australia in 2011 by Ajinkya Rahane helped him to fix his spot in the next series against England. He made his ODI debut against England as a replacement for Virender Sehwag, his debut of 40 runs was wasted as the match resulted in a rain washout at Chester-le-Street. Rahane also played a decent inning in the subsequent match. His next few performances were not that impressive against West Indies, Sri Lanka, Pakistan and England. In a short ODI career in the middle batting order he struggled several times to maintain a balance between defence and attack. Rahane displayed a better performance when batted in the top order with rapid centuries against England in September 2014 and Sri Lanka in November 2014. Rahane had an excellent series in India against South Africa. Batting at number 4 he made 3 half centuries including a smashing 89 against chasing South Africa’s massive total of 438 which was not sufficient however.

Ajinkya Rahane made his debut in Test cricket against Australia at Arun Jaitley Stadium on Mar 22, 2013. He was selected as a replacement for Shikhar Dhawan due to injury. His single digit runs contribution in first match arised many questions on his selection. Even after such performance by Rahane, he got place in playing eleven for the first match of India’s tour of South Africa in 2013-14. He batted at the lower middle order contributing 209 runs in the series. After so many matches sitting in extras and not playing in eleven, this was a crucial opportunity for him, even under such tough batting conditions, Rahane performed very well and somewhat ensured his spot in the team for the longer formats. Rahane scored his first century in February 2014 against New Zealand in Wellington, bringing out India from a losing spot. Rahane’s overseas performance has made him fix his spot in the playing eleven over Rohit Sharma for the India tour of England in 2014. Rahane justified his selection by hitting his second century in the second test against England at Lord’s. Rahane became the fourth Indian batsman to score a test century at Lord’s after Dilip Vengsarkar, Ajit Agarkar and Sourav Ganguly. So far he has maintained a decent reputation in the test cricket and with his excellent cricketing skills and batting down the line, on several occasions he has saved the team and brought them out of a crisis situation.

In the beginning of 2012 IPL, Rahane was not much to be considered to be a T20 player, however had an outstanding season with his franchise RR - Rajasthan. Previously being with Mumbai Indian he got very few opportunities to prove his worth. Under Shane Watson’s captaincy in RR - Rajasthan, Rahane got opportunity to play as an opener which he really proved his worth for. Rahane’s 2012 IPL season, first with his existing franchise RR - Rajasthan (RR) was an outstanding under Rahul Dravid’s mentorship. Rahane was away from Rajathan Royals in 2016 and 2017 and was part of Rising Pune Supergiant but was again bought by RR - Rajasthan in 2018 and since then he has been a patron to his franchise till date.

Ajinkya Rahane made his T20 International debut against England in August 2011, he scored a half century with 61 of 39 balls. Rahane was part of the team when India played in the 2014 T20 World Cup Final which later India lost to Sri Lanka. Rahane has played very less of the shortest format games for India however has played a significant number of matches in the domestic franchise league tournament Indian Premier League (IPL)

RECORDS AND ACHIEVEMENTS • Highest number of catches by a non-wicket keeper in a single test match. • First Indian “Player of the Match” of the World Test Championship. • First batsman to hit six 4’s in an over in IPL • Highest individual score for RR - Rajasthan in IPL • Ceat “Indian Cricketer of the Year” 2014-15 Rahane has always displayed that his approach toward the game is unique and his modulation in techniques as the situation demands. Rahane’s classic back-foot square punch is something won every cricket lover’s heart. Rahane has proven himself a player with patience and persistence, though facing long hard times with form and consistency, Rahane did not give up and stood up correcting and improving his skills which paid off well later and finally, Ajinkya Rahane rose like a bright star in the cricketing universe.