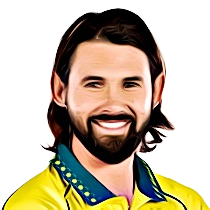 Kane Richardson is an Australian cricketer, who plays cricket for South Australia and Melbourne Renegades. It is said that since 2013 he is playing into the Australian squad with all his heart and soul.

Richardson is basically a right arm fast bowler and a right handed batsman who plays for his country. He is majorly appreciated for his white ball specialist nature as his success is mainly seen in shorter forms of the game.

Richardson was born on 12 february, 1991 in the city of Eudunda. He had spent his childhood in Darwin and in Northern Territory. He had moved back to South Australia o play for the one and only team over there that is Southern Redbacks in which the T20 debut was included for the year 2008-2009 Big Bash. His one day debut was in 2008-2009 with the Ford Ranger Cup, Richardson was lucky enough to be in the under19 cricket World Cup team. On a very good and surprising note, he scored a maximum of 5 wicket haul in the test series that was headed against India as well. In his youth matches he has played for about 3 matches in the tournament and in total he has played, two youth test matches and ten youth One Day Internationals.

He played about 25 ODIs in his career. When Mitchell Starc was injured for the second ODI against Sri Lanka at the Adelaide Oval in 2013 it was very tough for the team to cope up with the challenges that the team was facing.Therefore, Richardson was chosen for the replacement and he played the game till end, his first international game for his country was all that he needed.He has taken 39 wickets in his career.

He has played in 14 IPL matches till date. At the 2014 IPL auctions, he was bought by the RR - Rajasthan and took the field for them in a few games.Kane Richardson bowls with an incredible pace, aggression and well directed Yorker. It is said and seen that Pune Warriors bought him to play their best innings in the IPL.

He made his T20I debut for Australia in October 2014 against Pakistan.He has played in 18 T20 matches which were on a massive level and proved his excellence with his line and length while playing on the pitch. He had formed a strong niche with his fast medium bowling tactics. He impressed all the players with his bat and ball

It is said and seen from an unknown source that Richardson is set to play his first ever showpiece event. At that time the Australian pace attack team was very fragile that made the entire tournament go a little downslope but somehow he was always determined with his work towards the cricket well being and his form was up to the mark. He is most popularly known as Richo among the other cricketers on the pitch. He was signed by the Big Bash League for the 2010-2011 season. Kane Richardson limited over performance was up to the mark. However his vital contributions came in the next season. His elder brother is also a cricketer named as Callan Richardson, he basically represented the Northern Territory as the best man in the cricket. Major teams that is he is associated with are Kane Richardson has the distinction of presenting himself in several teams . Some of the prominent sides that he has represented are- Australia, Adelaide Strikers, Australia A, Australia Under-19s, East Torrens, Northern Territory, Northern Territory Under-19s, PINT Cricket Club, Pune Warriors, RR - Rajasthan, South Australia, South Australia Under-19s, South Australia Under-23s, Waratahs (Dalby), Woodville.