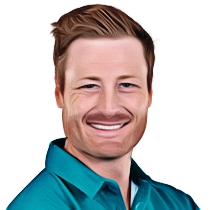 He was born on 30th September,1986 in the country of New Zealand. Moreover, he is an International cricketer, who has played almost in all the formats and has created his milestone in the cricket team since a very small age.

Martin took his birth in Auckland; his wife is a journalist and reporter. He attended Kelton primary and Kelton boys’ school. He has two toes in his left foot which happened due to an accident in a forklift and lost his three toes, it happened in the New Zealand squad which was very unfortunate but still he managed to stay into the cricket practice as well as the team. He has also played cricket for Auckland.

Guptill represented the Under 19 cricket world cup team, which was held in Sri Lanka in 2006. His one-day international debut was against West Indies and for New Zealand he was playing with his head high. He is the first ever New Zealander to score a century in his one day debut that had taken place on 10 January,2009 that was against West Indies in the state of Auckland, he became the first New Zealander to score a 100, his total score was 122 not out in the match, which is also the second highest score on debut for the New Zealand team. In the domestic cricket Guptill plays for Auckland and for the Suburbs New Lynn in club cricket. He made his first-class cricket debut in the year 2006 and this followed a score of four ball duck in the first innings and 99 in the second inning.

Martin Guptill's debut was against West Indies at Eden Park, Jan 10, 2009. He has scored most of his odi runs against sides that had a weak bowling line-up. He has struggled against sides like Australia, South Africa and England. Hence, Guptill needs to make sure that he needs to get runs not only against the weaker oppositions,but also against the strong opponents. He has played in 183 matches and his highest score in a match is 237.

In 2016, he played for the much known MI - Mumbai in the Indian Premier League. This continued for Kings eleven Punjab in 2017 IPL. He was bought by the SRH - Hyderabad for the 2019 IPL edition. He played a total of 13 matches in which he has scored 270 runs.

Apart from that, he has the highest score by a blackcap which is on tour of 2013 in England. Martin Guptill had hit 2 successive ODI in total that is 103 not out and 189 not out, two days later. No show in IPL as despite of the all batting records in the limited overs, Guptill is yet to play in the IPL. He has gone on the unsold on every bid while his bit is auctioned in for the IPL. Martin is dignified in his own play with a great coverage and hold over his bowling as well as little bit of the batting skills that he has in him. Marty has two toes which is due to an accident that is caused while he had the competition of Forklift, for which he was also named as Marty two toes by his fellow cricketers.