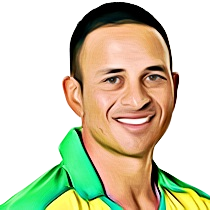 He is basically an Australian cricketer who currently represents Australia and Queensland. Khawaja has made his first class debut in January 2011 for New South Wales. Khawaja also played County Cricket for Derbyshire, Glamorgan, and Lancashire. He also played Twenty 20 cricket in IPL team that is Rising Pune Supergiant.

He has always played his ass off with his bowling as well as batting performance. He is basically a left hander batsman and a right arm off break bowler. He is a top order batsman as well.

He was born on 18 December,1986 in Islamabad Pakistan. Khawaja’s nickname is Uzzie, he played in the U-19 cricket World Cup in Sri Lanka. He was in the franchise for his good work that includes his bowling as well as batting. He made his first-class debut in 2008 for South Whales and had made good runs for the with his dedication towards the match. Moreover he had played many domestic matches that include, on 22nd June it was seen that Usman Khawaja will be a part of two test series that were against England. Since, 2011 Khawaja has played for County championship matches. Average was 39.87 and he was about to score a century with that.

Usman has played in 40 ODI matches since his debut against Sri Lanka at Melbourne Cricket Ground on Jan 11, 2013. He has 1554 runs under his belt including 2 hundreds and 12 fifties at an average of 42.0

Khawaja was also selected as an immense part of the 17-man Australian squad, this was for the 2010-2011 Ashes series. Looking at his line of work and perseverance, he seem to have a dedicated soul to cope with the opponents action and reaction. He was subsequently selected to play in the test matches in other parts of the country. Before the third Test that was played against India in March 2013, Australia suspended Khawaja, along with James Pattinson, Shane Watson and Mitchell Johnson following a breach of discipline. Usman had participated in many teams that included, Queensland cricket team, Glamorgan county cricket club,he was there in vitality blast 2018 and more. He has always impressed us with not only his top quality performance but his presence of mind into the matches as well. Usman Khawaja has become a renowned name in the list of A listed cricketers who have excelled in the format with their guts and knowledge towards the game. Khawaja made his Test return in the second Test that was held in 2013 with the emergence of Ashes series in his career, replacing Ed Cowan. In his first Test in more than two years, he scored his maiden Test century, in the first Test against New Zealand on 5 November 2015, in which he scored 174 with 16 fours and 2 sixes. He made this return in his tenth Test in the coveted number 3 position, helping Australia to an emphatic victory. Furthermore, he played test match against his native place that is Pakistan itself.

He has played in 6 IPL matches so far since his debut against DC - Delhi at Arun Jaitley Stadium, May 05, 2016.

Usman made his T20 debut against India at Sydney Cricket Ground on Jan 31, 2016. He has played in 9 matches so far and has a fifty to his name.

He is the first ever Pakistani cricketer born in Australia and he played for the overseas country. He has his own dignity and performing capability that no one other has. He is a qualified Pilot and knows how to fly in the air, surprising isn’t it! He is surely a young achiever as in 2005 he was awarded the player of Australian championship. He chose county cricket over IPL for his career enhancement and growth.