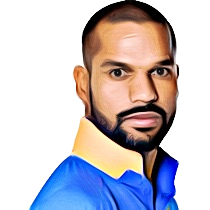 Shikhar Dhawan is an Indian cricketer who slays with his best epic performance and stuns us with the courage to score maximum runs through his left handed batting and right arm off break bowling.

He has played in the Delhi Daredevils from a longer period of time now. He also played for the under 19 and under 17 group of cricket team. This happened before him taking lead into the first class debut. It is said from an unknown source that Shikhar Dhawan became the fastest ODI champion to create a history with his highest score that is 3000 runs as a whole.

He is born on 5th December 1985 in Delhi. A Punjabi by blood and why not?, As we can see his hot boiling nerve while he is playing his innings is on the go. He started his career from a very small age of 17. Moreover he was always very keen to follow an extensive and broad lead while he is playing his part with all his fierce and on the spot technique.

He made his first-class debut for Delhi against Andhra in the year 2004. He also scored 49 in the Ranji Trophy that took place amidst 2004-2005 and he did a great deed by performing very well. He scored a total of 461 runs from 6 matches and a high score of 130 with that which was quite usual, the way he was picking up his velocity was worth appreciating as well. Further, there are many such moments that define Shikhar Dhawan’s consistency in his innings that include Challenge Trophy in February in which he was the match opener with his team mate, the great and grand MS Dhoni. Dhawan started the 2006-07 Ranji season with a century against Tamil Nadu, batting at number three, it was again a bliss to watch him like this. He was made captain of the Delhi team for the Ranji One-day Trophy in February 2007 to perform and show the responsibility, despite the presence of international players in the line-up such as Virender Sehwag, Gautam Gambhir, Aakash Chopra and Ashish Nehra who have such an experience. Dhawan had scored 161 runs with an average of 32.60 which is an exceptionally good strike rate, he had scored well but India could not proceed in the quarterfinals. He batted at four for North Zone in the Deodhar Trophy in February–March and averaged 23.66 from three innings, a blessing for the team to have him.

Dhawan had an amazing inning with his constant goal to put up his skills just to knock off the opponent. He started his giant footsteps with the One Day International debut in 2010 against Australia.His highest score in ODI stands at 143 and has played 136 matches in total.

Shikhar made his Test debut against Australia at Punjab Cricket Association IS Bindra Stadium on Mar 14, 2013. He has scored 2315 runs so far at an average of 40.61 which includes 7 hundred and 5 fifties. His highest score in Test stands at 190.

Initially,he played for the Delhi Daredevils in the Indian Premier League and made 4 half centuries in a row to make up the score board towards win. He was also the third-highest scorer to become in the lead of the Delhi Daredevils team. He was traded to the MI - Mumbai in exchange for Ashish Nehra, a great bowler of the team. He has played for the MI - Mumbai in the second and third season of the IPL, as we have seen. For the fourth season, he was bought by the Deccan Chargers for $300,000 and for last few years he is playing for SRH - Hyderabad.

Shikhar has played in 60 T20 matches in his career and has 1588 runs under his belt including 10 fifties. His strike rate in the shortest format 128.27 and his highest score in a match stands at 92.

He is a Sonnet cricket club alumnus and he honed his skills with the guidance of tutelage at the age of 12. His career beginning was as a wicket keeper, later he started polishing his skills as a cricketer. He has his immense love for bikes and tattoos. He switched from his initial role and changed a bit of his form as seen while he is playing his bat off into the presence of tons of spectators. He has a deep soft corner for animals as well.