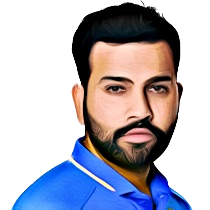 Rohit’s mother Purnima Sharma is from Visakhapatnam and his father Gurunath Sharma worked as a caretaker of a transport firm storehouse. Sharma was raised by his grandparents in Dombivali, Mumbai. Sharma is married to Ritika Sajdeh on December, 2015 and they were blessed with a baby girl named Samaira Sharma on 30th December, 2018.

Rohit joined a cricket camp in 1999 with the financial support of his uncle. His coach Dinesh Lad made him change his school to swami Vivekanand International School where he was a coach and can groom his to play well along with his studies.

Rohit Sharma’s entire domestic first-class career was made in Mumbai. In December, 2009, Rohit made highest run at 309 (not out) in the Ranji Trophy in Gujarat. In October, 2013 he was appointed as captain. He was named as the Skipper of Mumbai Ranji. In March, 2005, in Gwalior for Deodhar Tophy at number 8, Rohit scored West Zone against Central Zone. Sharma scored unbeaten innings of 142 in 123 balls against North Zone at Udaipur in the same tournament that brought him into the limelight. Sharma visited Abu Dhabi and Australia with the Indian team and was then included among India's 30-member possible list for the upcoming ICC Champions Trophy tournament. although he could not make up to the final team. His Ranji Trophy debut was made in Mumbai in the 2006–07 season and scored 205 off 267 balls against Gujarat. Mumbai went on to win the tournament with Sharma scoring a half-century in his second innings in the final against Bengal. In July 2006, Rohit Sharma made his first-class debut for India against New Zealand at Darwin where he scored 57 and 22 to make India win by 3 wickets.

Sharma debuted in his ODI career against Ireland at Civil Service Cricket Club on Jun 23 2007, but didn’t get a chance to play as he was at number 7 in the order and India won by 9 wickets. In the match against Pakistan in Jaipur, he scored ODI half-century at 52 (not out) and was selected to play with the Indian team for 2007-8 Commonwealth bank series in Australia. After the hit, there was a slowdown in his performance. In December 2009, considering his triple century in the Ranji Trophy, as Tendulkar opted to rest in the series, he was recalled to the ODI team for the tri-series tournament in Bangladesh. On 28 May 2010, Rohit marked his maiden ODI century (114) against Zimbabwe coupled up with another century in the next match of the tri-series against Sri Lanka on 30 May 2010 by scoring 101 (not out).Because of his performance in South Africa before the 2011 World Cup he was taken out of Indian team to play the tournament. In 2012, with a loss of his form, making a very low average of 12.92 with just a single half-century he made a fatal performance. In 2013, showing faith and trusting him, MS Dhoni decides to took him back in ICC Champions Trophy pairing with Shikhar Dhawan to make a successful win Of India defeating England. On 13 November 2014, Sharma plated against Sri Lanka at Eden Gardens in Kolkata and broke the world record for the highest score in a one-day international innings with 264 on173 deliveries. In 2015 World Cup tournament, Sharma marked 330 runs with one century, a score of 137 in the quarter-final tie against Bangladesh. He played 8 matches in Australia in the tournament to make India enter the semi-final and was thereby defeated by Australia. Sharma was appointed as a vice-captain of Indian cricket team on 15th April, 2019 tournament in England. He was the first one to score 5 centuries in the same tournament in the cricket match against Sri Lanka to become equal to Sachin Tendulkar’s record for the most centuries in the ICC World Cup. Winning the ICC's Golden Bat award, (third Indian player) with 648 runs in the tournament to finish as the leading run-scorer in the World Cup. He played well and has been excellent player In the ICC World Cups.

In 2007 ICC World Twenty20 Sharma scored 50 from 40 balls against South Africa in the quarter-finals. Indian team won the match by 37 runs and further went on to defeat Pakistan in the final. On 2 October 2015, during the South African tour of India, Sharma he became the second Indian cricketer to have scored centuries in all three formats of international cricket. (106 in the first Twenty20 international at HPCA Stadium in Dharamshala). On 8 July 2018, during a series in England, Rohit Sharma became the second Indian batsman, after Virat Kohli, to score 2,000 runs in a Twenty20 international career. He was the fifth batsman worldwide followed by Kohli were Brendon McCullum, Martin Guptill and Shoaib Malik. In November 2019, Sharma became the most-capped cricketer for India in T-Twenties’.

As of 2020, 39 international centuries: 6 in Test cricket, 29 in one-day internationals and 4 in Twenty20 internationals, Sharma ranked joint 17th among players with the most centuries in international cricket. He records the highest individual score by a batsman playing in a one-day international match, scoring 264 against Sri Lanka in 2014. Only player to have scored three double-centuries in International cricket. In Twenty20 international cricket, he holds the world records for most career runs and most career centuries. Just WOW! On 5 October 2019, during a Test match against South Africa, he became the first batsman to score two centuries in his first appearance as an opening batsman. Awards 1. Arjuna Award (2015) 2. ICC ODI Player of the Year (2019) 3. ICC ODI Team of the Year (2014 (12th man), 2016, 2017, 2018, 2019) All in all, Rohit Sharma is a wonderful player and has done tremendous job to make India win the battle against its competitive cricket teams and coveted matches. His style of playing matches with Virender Sehwag and Viv Richards. He has an appetite from achieving big hundreds to limited overs cricket matches and T-20s. In terms of improvements, he needs to work on his bowling. He holds a right-arm off spin bowling and is not a regular bowler.